Media personality Colin Cowherd is married and a father of two. 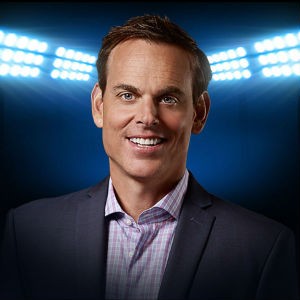 I'm so tired of people who can't be honest. "Beauty is on the inside" Really?? Then why do rich guys &

successful guys always end up with beautiful women but they have lousy personalities?

Don't let people with no life ruin yours.

If you resent success, you will never achieve it. Be excited about it, even if the success is not your own. Bitter people are rarely happy or successful.

What is the relationship of Colin Cowherd?

Reflecting on his personal life, he was married to Kimberly Ann Vadala for more than 11 years until they divorced in 2007. Moreover, they didn’t have any children together in their relationship.

After his devastating marriage breaks down, he found his second love, Ann Cowherd in 2009. After knowing each other long enough, they engaged in marriage in 2010.

They were blessed with two beautiful children. In addition, he seems to be a very loyal and dedicated person as there are no affairs, rumors, or controversy regarding his personal life. Apparently, he has a very good relationship with his family and is going very strong to date.

Who is Colin Cowherd?

Colin Cowherd is a sports media personality who hails from America.

He garnered a lot of attention for his roles as a host on The Herd with Colin Cowherd airing on Fox Sports Radio and Fox Sports 1.

What are the birth facts and childhood of Colin Cowherd?

Talking about the early life he was born on January 6, 1964. He experienced his childhood in Bay Center, Washington.

His parents were Charles (father) who was an optometrist and Patricia (mother) who was a housewife. He grew up along with an older sister, Marine. Unfortunately, his parents divorced when was very young.

His mother became responsible for his upbringing. However, not much is there regarding his earlier days and childhood. Despite that, it will not be wrong to say that he had a decent upbringing which has played a significant role in his success.

In the same way, the way he has displayed his talents and aptitudes, there is no denying that he had amazing education facilities to nurture, develop and guide his talents in the right direction.

It helps him to achieve what he always wanted to and dreamed of. However, there is no information regarding his education and qualifications in detail.

Initiating his career, he started working as a sports anchor on WTVT-TV on the weekends in 1996. Later on, he hosted in the morning time on all-sports radio KFXX in 2001. After two years he landed a hosting his show The Herd in the late morning time on ESPN Radio.

Additionally, he also served as a co-host of ESPN2’s show SportsNation for three years starting in 2009. However, he left the show as he revealed that he was comfortable hosting on the radio. His dedication led him to the Best Pundit of 2012 by PunditTracker. Later on, he became the host of ESPN’s talk show Colin’s New Football Show.

Recently, he joined Fox Sports and signed a contract of four years as a co-host in the daily sports talk show Speak for Yourself with Cowherd & Whitlock alongside Jason Whitlock.

What is the net worth of Colin Cowherd?

The exceptional and jaw-dropping talents he displayed in his career inevitably amassed her a lot of fame and popularity. In the same way, over the years, he has generated a lot of income from displaying his charismatic talents which surely has skyrocketed his net worth. Thus, his net worth as of now is, $14 Million with a staggering salary of $2 million per year.

In the same way, over the years, he has generated a lot of income from displaying his charismatic talents which surely has skyrocketed his net worth. Thus, his net worth as of now is, $14 Million with a staggering salary of $2 million per year.

However, he was criticized for making mean comments on the death of famous WWE superstars Eddie Guerrero and Sean Taylor.

He has an average body structure with a decent height of 6 feet 1 inch, he has brown hair color and his eyes are blue. However, there is no detailed information regarding his exact body figure.