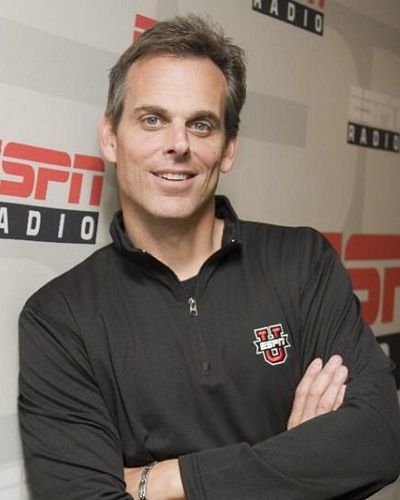 Beautiful Kimberly Ann Vadala is an American model. She completed her education in economics. She became more famous when she got married to Colin Cowherd. Colin and Kimberly married in 1996 and were very happy with each other.

They lived together for a complete 10 years. But in 2007, they announced to separate and got divorced.

About her ex-husband Colin Cowherd

Colin Murray Cowherd who is famous by the name Colin Cowherd is a sports media personality from America. He was born on 6 January 1964 in Bay Center, Washington.

He started his career as an anchor for San Diego Padres Double-A affiliate Las Vegas Stars. Later he became the sports director for KVBC in Las Vegas itself.

In 2003, he switched to the ESPN Radio network for the sports program. He was then going to leave ESPN as well, so ESPN announced,

“Colin Cowherd’s comments over the past two days do not reflect the values of ESPN or our employees, Colin will no longer appear on ESPN.”

Then again he became the host on Fox Sports Radi for the program, The Herd with Colin Cowherd.

You may also read Sports Journalist Jason Whitlock has his own version of Marriage!! Does he have any intention of getting married or yet not ready? All Details Here!

Colin’s father’s name is Charles, he is an optometrist and his mother’s name is Patricia, she is a housewife. He also has a sister. His father and mother divorced and the reason was his father’s alcohol drinking habit. So, he and his sister were brought up by his mother only.

Cowherd’s childhood memories have not been so good as he described,

“I was loner durin childhood, spending much time sitting on roof, listening to baseball games on the radio.”

He also shared that he had a head injury.

In 2005, Colin became the Radio Personality of the year. He became Nevada’s Sportscaster of the Year five times. In 2012, he was rated as the Best Pundit by PunditTracker for his sports predictions.

After he divorced Kimberly Ann Vadala in 2007, he did not have an affair with anyone. In 2010, he met Ann Cowherd and fell in love with her. In the same year, he got married to her. They are still happily married.

Handsome Colin Cowherd is a sports media personality who hails from America. He garnered a lot of attention for his roles as a host on The Herd with Colin Cowherd airing on Fox Sports Radio and Fox Sports 1. More Bio…

Robert Pattinson is ‘Kind of’ engaged with FKA Twigs! Is he really now in relationship with her or it’s just a rumor?
Tags : ESPN Model Radio personality Sports media personality