Colin Donnell is a married person. He has been married to American actress Patti Murin since June 19, 2015. They married in New York in a private ceremony.

The duo met the very first time in the stage of a musical adaptation of Love’s Labour’s Lost. They got engaged in December 2014. However, this couple has not welcomed any child yet but they are living happily in New York.

Previously, he was in a relationship with American actress, Zelda Williams, daughter of comedian and actor Robin Willims. But, they could not hold the relationship and end after a year in 2013. 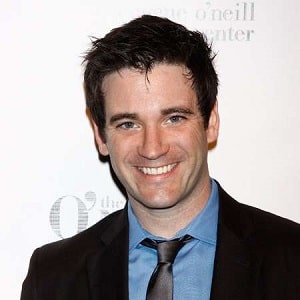 My family - my brothers and I especially - like dinners out and are really adventurous with food.

I came to Broadway through Indiana University.

Who is Colin Donnell?

Colin Donnell is an American actor and singer who is popular for his performances as Billy Crocker in ‘Anything Goes’.

He is also well recognized for his performance as Tommy Merlyn in The CW television series ‘Arrow’, and as Dr. Connor Rhodes on the NBC medical drama ‘Chicago Med’.

His mother is French and his father is of Irish descent. He is the youngest children of his parent’s three boys. his older brothers are Jason Donnell and Ryan Donnell.

Colin was interested in singing from his early childhood and he used to play guitar from an early age. He took singing classes at the age of 17.

Colin holds American citizenship but his ethnicity is a mix of French and Irish.

Talking about his education, he graduated from Indiana University in 2005. He went to high school with US comedienne Nikki Glaser.

He appeared in the stage for the first time when he was a high school student.

Colin Donnell made many national stage tours such as Wicked and Mamma Mia!. He came as Hank Majewski as his first Broadway Theatre performance and his other stage credits include ‘Follies’, ‘Anything Goes’, ‘Meet Me In St. Louis’, etc.

He debuted his acting career from an American period drama television series ‘Pam Am’ in which he portrayed the role of character Mike Ruskin in 2011.

After a year, he was featured in an American television series ‘Arrow’ in which he portrayed the role of Tomy Merlyn till 2015.

He appeared as Sean in the NBC drama pilot ‘Love Is A Four Letter Word’ in March 2015, and after that, he landed a regular role in the NBC series, ‘Chicago Med’ in which he appeared as a doctor in trauma surgery.

He was nominated for Drama Desk, The Outer Critics Circle, and Astaire Awards for his stage work ‘Anything Goes’.

The 36 years old actor has an estimated net worth of around $1.6 million as of 2022, and he has earned that sum of money from his professional career.

Colin Donnell has a height of  5ft. 10 inches and he weighs 78 kg. Colin has dark brown hair and grey eyes.

He has got two tattoos while he was visiting Memphis and Dayton. One of the tattoos is of five silhouettes of birds to indicate his family and a Fleur De Lis because his mom is French.