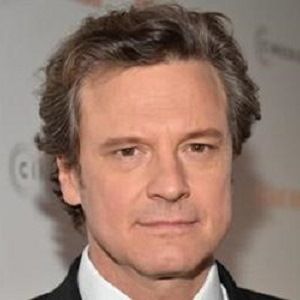 The English people, a lot of them, would not be able to understand a word of spoken Shakespeare. There are people who do and I'm not denying they exist. But it's a far more philistine country than people think

If I want my career to go on, I'm going to have to find some more Fiennes brothers! However, any similarity between them basically stops at their last name. I was in no way reminded of Ralph by working with Joe. I got on fantastically with both of them. I have huge admiration for them as actors but I couldn't compare them.

Colin Firth is a married man. He dated an actress Meg Tilly. They had fallen in love while working in the movie, Valmont. During 1990, she gave birth to their son, William Joseph Firth. Just after the start of their relationship, they had started living in Maple Ridge, British Columbia. But the relationship didn’t go well so they decided to head in separate directions in 1994.

Additionally, he was in a relationship with Jennifer Ehle blossomed on the sets of their TV show, Pride and Prejudice. However, their romance that lasted for about a year largely remained a well-kept secret until their separation in 1995. Moreover, he started dating Italian director and film producer Livia Giuggioli. During 1997, they got married in a private and romantic ceremony. The couple has two sons namely, Luca, and Matteo.

Who is Colin Firth?

Colin is an English actor and voice actor. Additionally, he is well known for portraying King George VI in ‘The King’s Speech’. In addition,  he has also received an Academy Award, a Golden Globe Award, two BAFTA Awards, and three Screen Actors Guild Awards, as well as the Volpi Cup for Best Actor at the Venice Film Festival.

Firth was born in Grayshott, Hampshire, England on September 10, 1960. He is the son of David Firth and Shirley Firth, his father was a history lecturer, and his mother was a comparative religion lecturer. When, as a young child he lived in Nigeria where his parents worked before returning to the U.K.

Additionally, he loved acting from a young age and started attending drama classes when he was ten. Then, he decided to become a professional actor when he was 14. He has two siblings namely, Jonathan Firth, Meg Tilly. He belongs to British- Italian nationality and mixed (English- Scottish- Northern Irish) ethnicity. His birth sign is Virgo.

Talking about his education, he attended the Montgomery of Alamein Secondary School on his return to U.K. where he found it hard to fit in. Whereas, he was constantly bullied by his classmates because of which he lost his interest in studies. Similarly, He spent two years at the Barton Peveril Sixth form college where he developed a love for English literature. Additionally, he did not stay in the college for long and joined the National Youth Theatre in London.

On talking about his profession, his first job was in the wardrobe department at the National Theatre. Additionally, he also played Hamlet in the Drama Centre’s production for which he got noticed by the playwright Julian Mitchell who cast him as Tommy Judd in the stage production ‘Another Country’ in 1983. Whereas, he forayed into films by reprising the same role in the film adaptation of the play in 1984.

Similarly, his breakthrough role happened in 1995. Moreover, he also played Lord Wessex in the 1998 romantic comedy-drama ‘Shakespeare in Love’ that tells of a love affair involving Shakespeare while he was writing a play. Whereas, it is fiction though there are numerous references to the life of the real-life playwright.

Therefore, he also played King George VI in the epic historical drama, ‘The King’s Speech’ in 2010. He earns a decent amount of salary. Hence, his net worth is around $25 million dollars.

On talking about his body measurements, Colin has a height of 6 feet 1 inch. Additionally, he weighs is 76Kg. Colin’s hair color is brown and his eye color is light brown.

Also, read the affair, salary, the net worth, controversy, and the bio of Rufus Sewell, Daniel Sharman, Clive Hornby