Colin Furze is a multi-Guinness World Record-approved inventor. He is married and a father of one.

Colin Furze is married and together they have a son, Jake. Furze features Jake very often in his videos. 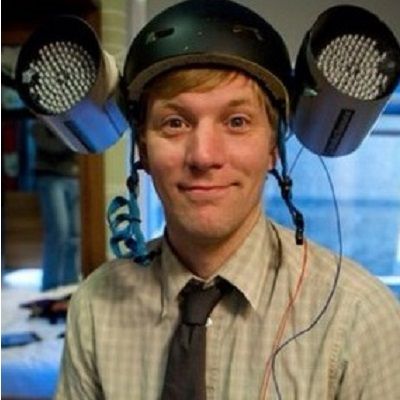 Who is Colin Furze?

Colin Furze is also a YouTuber, stuntman, filmmaker, and author.

Colin Furze was born in Stamford, Lincolnshire, England, the UK on October 14, 1979. His birth sign is Libra.

His parents are of Anglo-Saxon origins and they raised him along with his elder sister, Ellie Furze.

He attended Malcolm Sargent Primary School, Lincolnshire, England. However, at age 16 he dropped out of school. Around the same time, Colin became a professional plumber.

The beginning of his career was when he first launched his self-titled channel in November 2006 with his first post-Mr. Blobby.

However, it was Colin’s experience as a plumber that helped him launch his unique inventions and one of them is his Jet Bicycle.

Later on, he would go on to receive the approval of the Guinness World Record for building the world’s longest motorbike and the world’s fastest stroller with turbojet engines among others.

Many of Colin’s projects are funded by Television and Video Game franchises. They are showcased in movies such as Assassin’s Creed and the television series, You, Me and the Apocalypse.

Stunts Says It All

Colin’s extravagant firework stunts too have a tremendous fan following on youtube and won him a few police citations too.

-Why don’t you check out Colin Furze’s crazy marvels…

-And this was on 2010 March 27th when Colin’s flame-throwing scooter had him arrested for an alleged firearms offense!

As per 2022’s data, Colin Furze’s net worth is estimated to be $4M and he earns $36,058 per month as a YouTuber-cum-crazy inventor-stuntman!

Colin’s extravagant firework stunts too have a tremendous fan following on youtube and won him a few police citations.