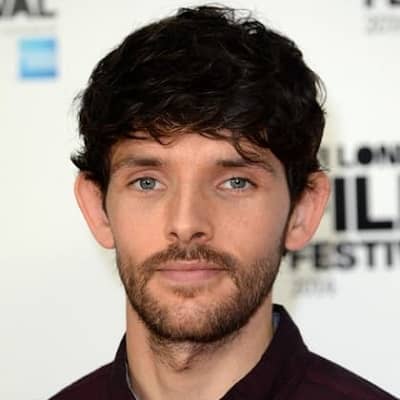 Colin keeps his personal life on a low profile. He hasn’t shared any relationship details officially with the media.

The actor was said to be dating an Irish actress Katie McGrath before. The two met first at the sets of fantasy drama Merlin in 2008. Their exact dating date is not revealed. However, it is said that they started dating in 2010.

There were even rumors about their engagement in October 2016. It was later rejected by both of them.

Also, Colin was rumored to be gay.

In spite of all, the actor is now enjoying his single life.

Who is Colin Morgan?

Colin Morgan is one of the popular Northern Irish film, television, theater, and radio actors.

The actor also involves in various social and charity works. He is represented by Ruth Young, United Agents, London, UK.

Colin was born on January 1, 1986, in Armagh, Northern Ireland, UK. The actor grew up with his two elder brothers.

His one brother’s name is Neil Morgan who is an actor and funeral director. All brothers were raised in Roman Catholic.

Colin holds British nationality and is of Northern Irish origin.

In 2004, he completed his diploma in performing arts from the Belfast Institute of Further and Higher Education. He graduated in 2007. In November 2010, the college honored him with an Award of Distinction for his contribution to the Arts.

Completing his academic program, he enrolled in the Royal Conservatoire of Scotland to hone his acting skills.

During his undergraduate program, director Rufus Norris chose him as the main character in his debut movie Vernon God Little.

The actor has an interest in acting from a young age. He was part of amateur local productions of Cinderella and Peter Pan at the age of 5.

Talking about his television debut, he first appeared in 2007. He starred John Leary in Christmas Special and Jethro Cane in Midnight in 2008.  Furthermore, the actor has also worked for radio and given voice for 2012’s videogame Merlin: The Game.

Moreover, the actor is also into various charity and social works.

The actor has amassed a net worth of around $4 million. He must receive a good salary as he is one of Ireland’s most promising actors.

As Morgan has never been outspoken about his relationship status, there is various speculation that he is gay. Moreover, there are also rumors that he is dating his British co-star Bradley James. It also came after he portrayed the gay role in Merlin.

Colin however cleared it from his Instagram Live in March 2020. He shared that he even doesn’t have good communication on a regular basis with Merlin’s co-actors.

On the other hand, it was said that he was engaged to Katie McGrath. It was also denied by both celebrities.

Colin prefers to stay away from engaging in any social media. He hasn’t any official accounts. Although there are other fanmade accounts. His Instagram, Twitter, and Facebook accounts respectively have over 57K, 83K, and around 25K followers.

The actor stands tall with a height of 6 feet (183cm) with a body mass of 75 kg. For his physical fitness, he always practices yoga.