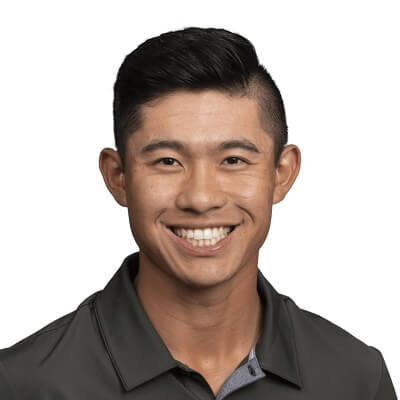 Collin is not married at the moment but he is in a serious relationship. He has been in a relationship with his girlfriend, Katherine Zhu for more than 3 years now. It seems that Zhu also played golf in her college years and it was during this time that the two met. It seems their personalities just clicked and so they have been together ever since.

They have a very loving as well as a competitive relationship, as said by both of them as they give it their all when playing golf against each other. They both bring the best out of each other and we would not be surprised if news of their engagement came out soon.

Who is Collin Morikawa?

Collin Morikawa is an American professional golfer. Though he is just 23 at this time, he seems to have a very promising future as a professional golfer due to the skills he has demonstrated thus far in PGA tour and through his amateur years at the University of California.

Collin Morikawa was born on February 6, 1997, in Los Angeles, California. As of 2020, his age is 23. He was born to father Blaine and mother Debbie Morikawa. Aside from the names, other information on his parents and whether he has siblings is not known.

Regarding his ethnicity, he is of Japanese and Chinese descent. Morikawa is a third/fourth-generation American.

Talking about his educational background, Collin went to La Cañada High School and for university, he attended the University of California, Berkeley. He began playing collegiate golf in the university and because he was pretty good at it, he made a career out of it.

Collin is fairly new to the world of professional golfing because of his young age. And although he currently cannot match up with the top pros of the golfing world, there’s nothing that says he won’t be able to beat them in a few years. He seems to have a bright future ahead of him when we look at his performance in amateur golf.

Some highlights include his Silicon Valley Amateur win, Annual Western Intercollegiate win, and his win at the 2019 Pac-12 Championship. He even spent 3 weeks as the top-ranked amateur golfer in the World Amateur Golf Ranking in May 2018

He just made his debut as a professional at the 2019 RBC Canadian Open, where he tied for 14th place and picked up a win in the PGA Tour. The young golfer has made 4 appearances for the U.S. national team and won in 3 out the four tournaments and is ranked 27th in the Official World Golf Ranking as of June 21st, 2020.

Other than that, he hasn’t had a chance to showcase his skills mostly due to the recent pandemic which suspended all major competitions all over the world. However, we can safely assume that he will be back and better than ever in the competitions he joins once the pandemic is over.

Collin Morikawa stands at a height of 5 feet 9 inches and weighs around 77 kilograms. His eyes are dark brown in color and he has straight black hair.

As a golfer, Morikawa’s salary varies with the tournament as the prize money varies from one tournament to the other. Currently, he has already accumulated an estimated net worth of around $1 million.

You may also like to read the Bio, Career, Body Measurements, Net Worth, Social Media, Relationships, and more about Mackenzie Bezos, Jeff Bezos, Lauren Sanchez, etc.