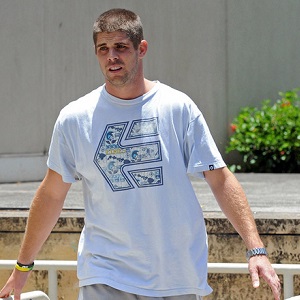 Colt Brennan was single before his death. Regarding his relationship status, he was in relation with a girl named, Shakti Stream.

Who was Colt Brennan?

California-born Colt Brennan was a retired professional ‘American football’ player. He was popularly famous for playing with Oakland Raiders and Washington Redskins.

Presently, he was a prominent figure among the fan for holding the NCAA Division I (NCAA) record for most touchdown passes in a single season with 58. He used to play at the quarterback position.

Colt died on May 11, 2021, due to a drug overdose. Sadly, his father announced his death to everybody.

Rivera was born in Laguna Beach in the state of California. Born on August 16, 1983. His nationality was American and his ethnicity was Caucasian.

He was interested in playing football and basketball at a young age. Later, this did define his career.

As per his education, he attended Mater Dei High School in California. Afterward, he attended Worcester Academy in Massachusetts for a postgraduate year. Additionally, he also enrolled at the University of Colorado. He mostly played sports during his school and college days.

Colt started his football career in his high school days. He played for the University of Hawaii Warriors team before his professional career. Afterward, he got drafted in 2008 by Washington Redskins. Although he signed a 4-year contract with them, Redskins released him in 2010.

Then Colt Brennan joined and left two teams, Oakland Raiders, and Hartford Colonials in 2011. Furthermore, he signed with Saskatchewan Roughriders to play in the Canadian Football League. But it didn’t work out for him and the team.

In 2013, he signed with Los Angeles Kiss and played with them for 1 season in Arena Football League. Afterward, in 2014 he got released from Los Angeles Kiss. It was because of his brain injury. As of now, he is retired from his professional football career.

There is no information about his salary and he had an estimated net worth of $1.8 million.

On July 25, 2012, in Hawaii, police arrested him on suspicion of driving under the influence.

Additionally, he was also under suspicion of third-degree promotion of a dangerous drug. Later he pleaded guilty and paid a $300 fine.

He was also sent to a rehabilitation center due to a drug overdose.

Colt Brennan has a height of 6 feet 3 inches. His body weight is 98 kg. His hair and eye color are also brown. Furthermore, there are no details regarding his body measurements.