Common is a famous American rapper and hip hop recording artist. Common is an unmarried man.

Common is an unmarried man. However, he has dated a couple of women in his life. In 1999, he began dating author Karrine Steffans. A year later, he was linked up with singer-songwriter Erykah Badu. However, they couldn’t carry their relationship for so long and broke up in 2002.

Later in 2005, Common had a relationship with actress Taraji P. Henson which continued till 2007. In the same year, he began going out with actress Kerry Washington. Additionally, he had also romantically linked up with famous tennis player Serena Williams.

Moreover, their relationship lasted for a few years until 2010. Common also has a daughter named Omoye Assata Lynn. In 2017, he was spotted with the lawyer and activist Angela Rye.

Recently, after months of rumors, this rapper confirms his affair with comedian Tiffany Haddish. 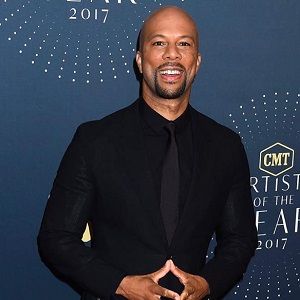 Everything I'm saying shouldn't be taken so serious. I'm playing, but at the same token, I'm acknowledging that I'm not always the perfect man

I'm not always doing the right things. That's who I am. I'm working to be better.

Man, if I get a chance to speak on the microphone, I've got to say something somewhere in there. You know, I'm going to laugh and have fun, too, but something has to be said that has some substance, because this is a platform, and the power that we have with words and with this microphone is phenomenal.

Playing basketball is definitely one of my favorite things to do.

Common is a famous American rapper and hip hop recording artist. He has won Oscar in 2015 as Best Achievement in Music Written for Motion Pictures, Original Song “Glory”. Furthermore, he also won the Golden Globe, AAFCA Award, and BET Award for the same category.

He rose to fame as he launched his first album Can I Borrow A Dollar?. In addition, he also worked as an actor in a couple of films such as Smokin’ Aces, American Gangster, Terminator Salvation, and Suicide Squad.

Common was born on March 13, 1972, in South Side, Chicago, Illinois, United States. Talking about his nationality, he is American and his ethnicity is African-American.

Furthermore, he grew up along with his mother as his father divorced her when he was six years old. Moving towards his education, he attended Luther High School South in Chicago.

Later, he completed his graduation in business administration from Florida A&M University.

Common: Career, Net Worth, and Awards

Common began his music career with his debut album Can I Borrow a Dollar?. In 1994, another album Resurrection came which also featured the hit single  “I Used to Love H.E.R.”. Later in 2000, he landed the huge hit album Like Water for Chocolate. Furthermore, a couple of singers such as D’Angelo, Macy Gray, and Roy Hargrove contributed to his single “The Light”.

A couple of years later, in 2002, he came with another album named Electric Circus followed by 2005 Be. He has won Oscar in 2015 as Best Achievement in Music Written for Motion Pictures, Original Song “Glory”. Furthermore, he also won the Golden Globe, AAFCA Award, and BET Award for the same category.

Some of his other musical works include Finding Forever, Nobody’s Smiling, Black American Again, and August Greene with Robert Glasper and Karriem Riggins. In addition, he also worked as an actor in a couple of films such as Smokin’ Aces, American Gangster, Terminator Salvation, and Suicide Squad.

Back in 2005, his funk/soul-based Be peaked at the No. 2 album on the Billboard charts. In the album, Kanye West also contributed to the single GO!. Some of his television roles series include Girlfriends, One on One, Chappelle’s Show, Soul Train, and a few more. Additionally, Common has also starred in Oprah Winfrey‘s show The Oprah Winfrey Show, The Late Late Show with Craig Ferguson, Real Time with Bill Maher, and a few others.

Apart from acting and music, he is also a writer and activist. He is a supporter of animal rights and PETA. Furthermore, he also took part in various charity shows as well as awareness activities.

Being a successful songwriter and singer, he earns a massive amount of money from his profession. He has a net worth of $45 million as of 2022.

As of now, he has won several awards which include an Oscar for Best Original Song for his composition “Glory” with John Legend for the film Selma. In addition, he also received Golden Globe, AAFCA Award, and BET Award for the same category.

Common once involved in a feud with Drake as one of his songs The Dreamer/The Believer included lyrics critical of rappers. However, his song was not aimed specifically at Drake. Later, Drake responded by releasing “Stay Schemin” with Rick Ross and French Montana.

Common has a height of 6 feet and weighs 84 kg. Moreover, he has a pair of dark brown eyes and he is bald.

Additionally, his other body measurements include 44 inches chest, 16 inches arms, and 35 inches waist.

In addition, he also runs a YouTube channel on which he has earned over 164k subscribers.