Updated On April 7, 2021 | In Entertainment , Married , Relationship
Share this 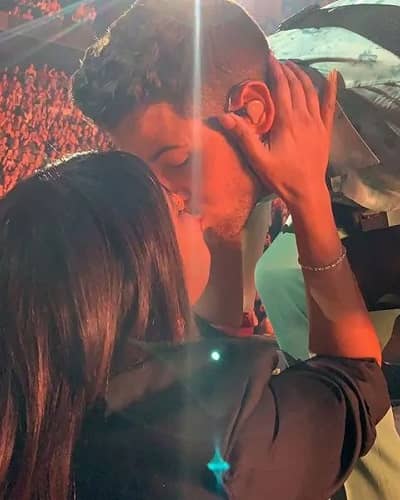 Nick Jonas is one hell of a loving husband to Priyanka Chopra which he proved during a concert.

The Bollywood diva and Hollywood king shared a kiss during the 2019 Jonas Brothers concert. The video of Nick kissing his wife had gone viral.

The Jonas Brother’s concert was held in the USA where Priyanka stole a kiss being in the audience section from the performing Nick who was on the stage.

Not just Jonas-Chopra but Jonas-Deleasa also had a sweet kiss. Joe was badly missing his lip-locking partner, his wife Sophie. The romantic husband Nick also gave a shout-out to his lovely wife who was blushing standing next to Danielle Deleasa.

Also read Nick Jonas joining Blake Shelton, John Legend, and Kelly Clarkson on The Voice as a coach for Season 18!

Nick never misses a chance to flaunt love for his wife whether it is a concert, family vacation, Valentine’s day, Hindu festivals, and romantic dates. Here are some pictures of them kissing.

Nick is an American singer, songwriter, producer, and actor. He released his eponymous debut album in 2004 and rose to fame as a member of the boy band the Jonas Brothers.

His album ‘Nick Jonas’ entered the top ten of the Billboard 200. He has more than 30 credits as an actor for appearances in various movies and television series. Read more bio…