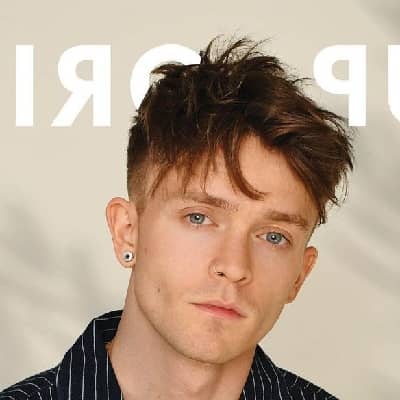 Connor Ball is currently in a relationship with a girl named Lucee more. However, there is not much known about Lucee. Recently, the couple celebrate their 3 years of relationship on August 13, 2021.

In November 2015, Connor was reported to hang out with musician and Little Mix star Jade Thrilwall in an interview with Sun tabloid. However, the duo parted ways at the launch of Little Mix’s third studio album, Get Weird in London.

Who is Connor Ball?

Connor Ball is a musical artist and actor from Scottish. He is a bassist of the British pop-rock group The Vamps. The band consists of members Bradley Simpson, James McVey, and Tristan Evans.

The musician is the son of Stuart Stephen (father) and Kelly Ball (mother). He has a brother named Lewie Ball (Younger brother). Later, his parents divorced and Kelly remarried Simon Ball (stepfather). He has also two stepbrothers named Angua and Hamish from his mother another marriage.

Talking about her academics background, he attended Henley high school in Birmingham. Connor holds Scottish nationality and belongs to the Caucasian ethnicity.

In 2012, Connor joined the British pop-rock band, ‘The Vamps’ as a bassist and singer. He was the last member to join the band. The band rises their way to stardom after uploading their cover songs on YouTube. In November 2012, the band signed with Mercury Records. On September 29, 2013, the band released their first single ‘Can We Dance’.

Aside from music, he is also an actor and was first seen in the comedy film Janoskians: Untold and Untrue in 2015. Moreover, he made his TV show debut through the British talk show, This Morning.

Connor had a weird fan experience for a lifetime. His five fans walked into his room while he was naked at a Manchester hotel. During the time, James was also in the room.

Similarly, he fell off the stage at the O2 Arena during a support performance at the Taylor Swift concert in February 2014.

The main source of Connor is his profession as a musician. As per other online sources, he has an estimated net worth in the range of $100 thousand to $1 million. However, his salary and other earnings are still under review.

Additionally, he has done some endorsements including a Do Something Organization commercial named “Teens for Jeans”. He has also modeled for “Saint Kidd”.

The musician stands at the height of 5 feet 6 inches tall. His weight is about 66 kg. He has blue pair of eyes and his hair color is black. His chest, biceps, and waist sizes are 37, 13, and 32 inches. He does his left ear pierced.

Similarly, he has a verified Tiktok account with nearly 73.3k followers. He has also a self-titled YouTube channel with over 67.2k subscribers.