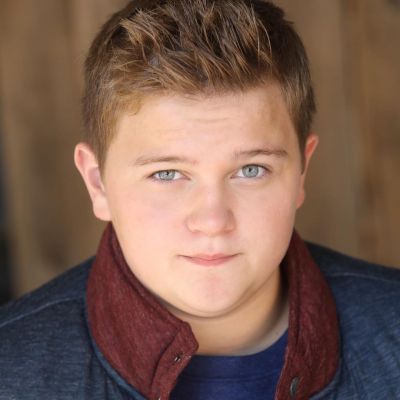 Talking about his love life, Connor is suspected to be dating Azalea Carey. Carey is also a popular TikTok star.

However, their relationship details are still not exposed to the public till now. He has been seen with Carey on his Instagram many times.

Who is Connor Cain?

Connor Cain is a well-recognized American actor, YouTube star, and social media personality. Cain is widely famed for his role in Criminal Minds(2005), American Horror Story (2011), and Rift I Duhi(2018).

Moreover, he owns a YouTube channel named Mad Panda where he posts funny videos, challenges, gaming content, and so on.

Connor Cain was born on 8 November 2005. At present, his age is 15 years old. Likewise, his birthplace is the United States.

Connor is the son of her mother, Amber Cain whereas her father’s details are still behind the curtain. Moreover, he has two brothers as well named, Cole Greenwood and Chase Greenwood. Sadly, one of his brothers, Chase demised on 26 August 2018. He has shared his father’s photos on Instagram without any disclosed details.

Talking about his nationality, Cain holds an American identity whereas his ethnicity is mixed.

Regarding education, the actor has not shared his educational details with the public. He might be in his high school at the moment and might be studying from high school in the town.

Professionally, Connor Cain is a well-named social media influencer and actor as well. He has a massive fan on YouTube and Instagram as well. The YouTube star has more than 252k subscribers on his official YouTube channel @Mad Panda. He created it on 6 September 2016.

Moreover, he has gained more than 9 million views on his channel. He generally uploads fun videos, challenges videos, and so on.  Also, he is the content creator of many games. Cain also posts video game content like Minecraft, fall guys, Fortnite, warzone, gtav, and so on. Additionally, Connor has gained a high audience from his YouTube career.

Apart from this, Connor has emerged in some movies as well. He earned huge popularity after portraying the role of Bobby Maloney in the TV series Schooled. It is an American television sitcom that was created by Adam F. Goldberg and Marc Firek. Its main stars are AJ Michalka, Tim Meadows, Bryan Callen, Brett Dier, and Haneefah Wood. The series featured on 9 January 2019.

Other than this, Cain has emerged in some other movies such as Rift I Duhi, and The Kids Are Alright.

Talented star, Cain has earned a handsome amount of money from his profession. He is active on YouTube as he regularly posts content on different social media.

It is reported that Connor Cain has an estimated net worth of $500 thousand.

Connor has never been part of any controversial matter or rumors till now. He has a sustained balance between his professional and private life.

It seems that the YouTube star prefers enjoying his personal life and does not want to merge it with his professional life.

15 years old star personality, Connor Cain has decent looks and an admirable personality. He stands at a height of 5 feet 4 inches. Also, he has a balanced bodyweight of 93 kg.

Furthermore, Cain has blue eyes whereas his hair is light brown.

Nevertheless, the social media star has never mentioned other physical details in the public yet.

Regarding his social media presence, Connor Cain is an active personality on social media. Connor has more than 328k followers on his official Instagram account @officialconnorcain.

He also owns a YouTube channel named Mad Panda which has more than 252k subscribers as of now.