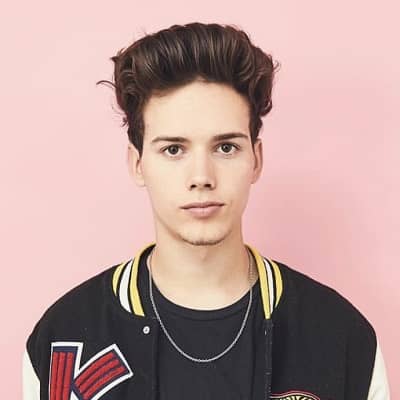 "'Are you the new Eminem?' No, I'm the first Michael Conor. Don't get it twisted."

"I don't want anyone to ever think we don’t appreciate everything you guys do for us. Every tweet, every letter, every hug means so much to us. It's amazing how much y'all believe in this band. We will make you all proud one day. Remember this tweet!"

"You ever look at all the people around you and realize that everyone you see has their own story and own set of problems. We're so insignificant in the grand scheme of things.

Conor Michael Smith is in a relationship as of now.

According to the sources, he is dating Juliet Webster. But details about his girlfriend and affair are not disclosed.

Who is Conor Michael Smith?

Conor Michael Smith is a rapper who is formerly known by his stage name as Michael Conor.

He is best recognized for his appearance on the ABC reality show series Boy Band in 2017. Moreover, he along with the fellow Boy Band contestants also form their band, ‘In Real Life‘.

Conor was born on June 07, 1999, in Cleveland, Ohio, United States. His mother’s name is Dena Smith but his father’s name isn’t disclosed.

Conor has four siblings. His younger brothers are Patrick Smith and Brendan Smith, similarly, his younger sisters are Kaitlyn Smith and Erica Smith.

The rapper used to take violin lessons when he was just seven yrs old. He belongs to American nationality and is of ethnicity.

Talking about his education, the rapper went to the Shaker Heights High School. In addition, he has also studied in an elementary school in the Lomond neighborhood of Cleveland.

Conor was a contestant on the ABC reality show series Boy Band in 2017. In the audition, he performs as a rapping violinist with “A Little More” by Machine Gun Kelly. He got the contract and was invited for the show participation through Instagram and Skype sessions. The rapper was discovered by ABC through social media. Conor was never in the danger zone of elimination in the show.

Then after the show, the five finalists for the show Brady Tutton, Chance Perez, Drew Ramos, Sergio Calderon, and Michael Conor together formed their band, In Real Life. They released their debut single, Eyes Closed in 2017. The band has then released a series of singles including Feel This Christmas, Eyes Closed Acoustic, and Tattoo (How ‘Bout You).

Conor made a remix to Lucky You by Eminem Jan 2019. The song also featured Joyner Lucas. It received great success. After it, he released Do or Die in March of 2019.

Thomas Crane has filmed and directed its videos. Just on October 27, 2020, Conor released his first single With You in Mind. He has talked about the Black Lives Matter movement in the song.

The rapper must have a good earning from his career, yet his net worth and salary are under review.

In May 2018, there was a person who revealed that Conor uses some offensive slurs when he was younger. He also publicly apologized for it through his tweet.

Talking about his appearance, he has dark brown colored hair with beautiful blue eyes.

In addition, he has violin F-holes tattoos on both of his forearms. Likely, he also has a puzzle piece tattoo on his right arm. It is the symbol of an autism spectrum disorder.

Likely, his Facebook page also holds around following. Furthermore, he has his own YouTube channel with 65.5K subscribers.