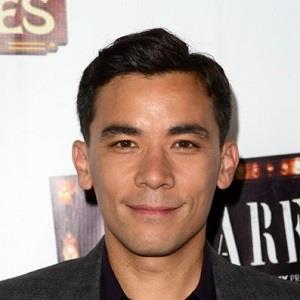 Conrad Ricamora is openly gay and is in a relationship. He is dating a business analyst named Joshua Cockream.

This couple started to see each other from 2017. They often share their photos on social media.

Who is Conrad Ricamora?

Conrad Ricamora is an American actor and singer. He is seen playing the character Oliver Hampton on a legal drama series How to Get Away with Murder from 2014 till present.

Talking about his early life, he was born on February 17, 1979, in Santa Maria, California, USA. His birth name is Conrad Wayne Ricamora and has an ethnicity of Filipino-German-English.

Conard spent his childhood with his parents in Niceville, Florida. During his childhood, he was an avid tennis player.

Conard completed his education from the University of Tennessee. After that, he attended the Queen’s University of Charlotte and graduated with a BA in Psychology.

Conrad Ricamora began his acting career in 2006. His first acting role was in the 2006 movie Talladega Nights: The Ballad of Ricky Bobby. After that, he didn’t have any acting role until 2013. He has appeared in a theater musical, Here Lies Love in 2013 as Ninoy Aquino. He played this character until 2017.

For this, he won Theatre World Award and was also nominated for the Lucille Lortel Award for Outstanding Lead Actor in a Musical.

In 2014, Conard began playing Oliver Hampton on ABC’s legal drama series How to Get Away with Murder. From season three, he appears as a series regular in the series. From 2015 to 2016, he appeared as Lun Tha in The King and I. For his role, he won The Grammy Award.

In addition, he earned nominations for Best Musical Theater Album, Principal Soloist. He recently appeared as Jack in the movie The Light of The Moon in 2017.

This actor’s estimated net worth is $500 thousand.

Rumors are that Conard and actor Jack Falahee are in a relationship at the present time. The actors play gay couples in How to Get Away with Murder and they are rumored to be in off-screen romance as well.

In an episode of 2016, the kissing scene between Conrad and Jack made highlights on the internet as the scene fell in issues of foreign censors.

Philippine TV banned the scene. As a result, actor Conrad showed his anger and frustration on Twitter. Later, he and his partner Jack both expressed their anger directly demanding an answer.

Conrad Ricamora is 6 feet tall. His weight is average. His eye color and hair color is dark brown.

Conrad being a media personality has been active in popular social media.