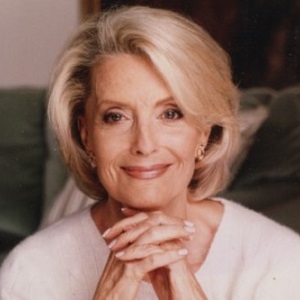 Constance Towers has been married twice in her life. Her first marriage was with a businessman, Eugene McGrath. Their marriage ceremony happened in 1959.

The couple had two children together named, Maureen and Michael. They were going well until things started turning bad. In 1966, the couple separated and went on to different paths.

After a decade of her first divorce, she married actor John Gavin in 1974. They are still together sharing the love and care in their early 80’s. After marrying him, she became a mother of two stepchildren, Christina Gavin and Maria Gavin.

Who is Constance Towers?

Constance Towers is a popular American actress and singer. She possesses American nationality.

She is popularly known for her roles in movies like, “The Horse Soldiers”, and “Sergeant Rutledge”. Additionally, she is known for her portrayal of Kelly in a 1964 American neo-noir film, “The Naked Kiss”.

Presently, she plays the character of Helena Cassadine in TV series, “General Hospital”.

Constance was born in the city of Whitefish in the state of Montana on May 20, 1933. Her nationality is American and ethnicity is Irish.

Her birth name is Constance Mary Tower. She was born to the parents: Ardath L.(mother) and Harry J. Towers(father). Both of her parents were Irish immigrants.

Her father was a pharmacist. At the age of seven, she was discovered by talent scouts. This landed her role as child voice actress in radio programs.

She grew up with increasing passion towards acting. Afterward, at 12, she acted in some play at a local theater in her hometown.

As per her education, she attended Juilliard School of Music and American Academy of Dramatic Arts. She graduated from there learning singing with Beverley Peck Johnson.

Constance began her acting career at a very young age. At the age of 7, she worked as a child voice artist. Afterward, at 12, she worked in play at a local theater. She went on doing various plays in radio and theater.

Consequently, she was even offered a contract by Paramount Pictures but it was rejected by her parents. On TV, she appeared for the first time in a TV series named, “Tales of Tomorrow” in 1952.

Similarly, in 1955, she made her debut on silver screen in a Technicolor film, “Bring Your Smile Along”. It was 1959 when she got her breakthrough role in “The Horse Soldiers”. This boosted her career and landed her many movies.

In 1974, she starred in a film, “Once in her Life” as Joan Baldwin. Her powerful performance earned her nomination for “Emmy Award for Best Actress in a Special Program”.

Additionally, she starred in many movies like, “The Naked Kiss”, “Sergeant Rutledge”, “Fast Forward”, “The Perfect Murder”, and others.Alongside films, she also starred in TV series like, “Love Is a Many Splendored Thing”, “Sunset Beach”, “General Hospital”, and so on.

Constance Towers: Salary and Net Worth

There were several rumors that surrounded her comeback in General Hospital in 2014, which turned out to be true. Although, she has done some controversial roles in her films, other than that she doesn’t get herself dragged into controversies in real life.

Presently, there are no any rumors that surround her personal and professional life.

Constance has a good height of 5 feet 7 inches and weighs around 55 kg. She has blonde hair color and her eye color is blue. She has a well-shaped body of 34-26-36 inches. Her bra size is 34C, her dress size and her shoe size is unknown.