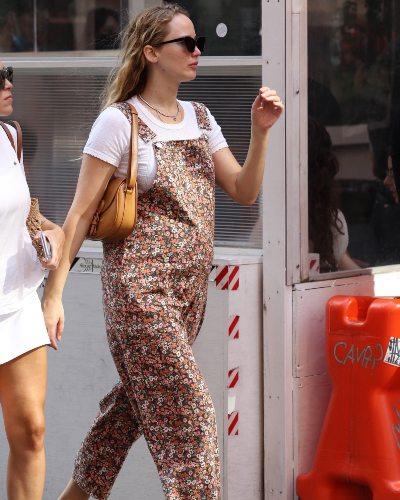 Actress Jennifer Lawrence is going to be a mother! The Oscar-winning actress is pregnant and expecting her first child with her husband Cooke Maroney. She showed off her belly bump in a pair of floral overalls during a stroll through New York City on 8th September 2021.

She was wearing a floral overall and a delicate white T-shirt accessorized with a leather bag over her shoulder and strode through the streets in her jelly sandals. She was accompanied by a friend with whom she stopped at Fanelli’s Cafe for a meal. On the ladies’ day out, they enjoyed a delicious meal where Jennifer went for fried chicken, a bowl of tomato soup, grilled cheese, along with a plate of French fries.

Both Lawrence and Maroney are bursting with excitement for the upcoming baby. A source revealed,

“They both want children and have been discussing starting a family. Their families truly believe they are meant to be; his family loves her family and vice versa, so their parents are excited. Their parents get along so well and are all looking forward to big family get-togethers.”

Likewise, Jennifer and Cooke have been married to each other in 2019 at the Belcourt of Newport in Rhode Island. Their wedding was attended by 150 guests and was hosted at a clambake on Rose Island under a white tent.

Jennifer Lawrence is an American actress. Jennifer is best known for playing Katniss Everdeen in The Hunger Games film franchise. She is also widely known for portraying Raven Darkholme/ Mystique in the X-Men film series.

In 2013, she won the Academy Award for Best Actress for her role as Tiffany Maxwell in the film Silver Linings Playbook. Read more bio…