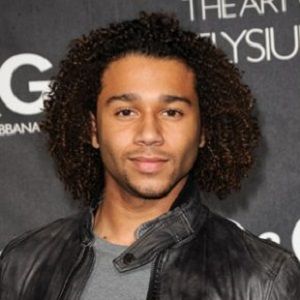 I'm a very outgoing person. I'm always happy, I'm one of those people who are always smiling. If somebody described me to somebody else, they'd say the kid with the curly hair with the big smile on his face. I get along with everybody

I like outgoing girls with a lovely smile and beautiful eyes

Everybody at school knew who I was because I'm just a really friendly person.

Who is Corbin Bleu?

Corbin Bleu is an American actor, model, dancer, film producer and singer-songwriter. He performed in High School Musical series. Song from the movie was named as the official song of 2007 Little League World Series. His debut album Another Side debuted at number thirty-six on the U.S. Billboard 200. Corbin was considered as a host for The X Factor USA, Fake Off.

Corbin Bleu was born on February 21, 1989, in Brooklyn New York, USA. His nationality is American and ethnicity is mixed(Italian, Jamaican, and American).

He is the son of Martha, Italian American and David Reivers, Jamaican American. His father is also an actor. He has three sisters named: Hunter Reivers, Jag Reivers, and Phoenix Reivers.

In his childhood, he studied ballet and jazz dancing. Corbin graduated from Los Angeles County High School for the Arts. Subsequently, he took classes in dancing at Debbie Allen Dance Academy. He majored in theater in New York from High School for Performing Arts. After his graduation, he was admitted to Stanford University.

Corbin was a born actor. He started acting at the age of two working in television commercials for Life cereal, Bounty, Hasbro, and Nabisco. At the age of four, he became the model for Ford Modeling Agency in New York. Corbin had his images in toys and game packagings and also appeared in print ads for stores. At the age of six, He did his first professional theater.

Corbin played an abandoned homeless mute in the play “Tiny Tim is Dead”.In 1996 Corbin moved back to Los Angeles where he worked in a television series High Incident. Corbin also appeared in Malcolm and Eddie in 1998. Corbin was also seen in The Amanda Show.

He was also the main cast as Nathan McHugh in Flight 29 Down.in 2009 he was again seen in the lead role in “The Beautiful Life”. His other performance included The Good Wife, Blue Bloods, Franklin and Bash, One Life to Live, Castle and The Fosters. Corbin was also a runner-up in the show Dancing with Stars.

Corbin also did television shows including High School Musical, High School Musical 2, Mother Goose Paradise, Jump which was an Emmy Award Winning Movie. Corbin also gave his debut album song to the movie for its promotion. His career includes a movie like Soldier, Family Tree, Mystery Man, and Galaxy Quest. Corbin was also the producer of many films including FreeStyle and Scary or Die.

Corbin is also a singer. His debut album is Another Side (2007), which was in billboards 200 album chart scrolling at no. 36. In 2009 He released his second album “Speed of Light” but it didn’t roll on billboards chart. Corbin also became the show’s sponsor of HP and began airing the show’s five episodes on YouTube. Corbin made his Broadway stage debut in “In the Heights”. He also performed in I Owe My Life to Corbin Bleu. Corbin also gave the voice Flip to Tonka Chuck and Friends: Big Air Dare. Corbin starred in the drama film To Write Love on Her Arms in 2012. He also has a role in the horror film The Monkey’s Paw and Nurse 3D. Bleu was cast on the ABC daytime soap opera, One Life to Live. His another successful movie was Megachurch Murder in which he played as Marcus King.

Corbin Bleu: Salary and Net Worth

Corbin’s total Net worth is $4 million but his salary is not revealed yet.

It was once rumored that Corbin is dead after the twitter trend # RIPCorbinBleu went viral nationally but it ended as a HOAX when Corbin tweeted “Hey everyone I’m not dead!! Don’t believe the crazy stories. I’m at Magic Mountain having fun!!”.

Corbin was also rumored to be dating his co-star Monique Coleman seeing his on-screen chemistry, but in reality, it was not transferred to off-screen and was only a rumor.

Corbin has the height of 5 feet 8 inches. His body weighs 72kg. He has black hair and dark brown eyes.