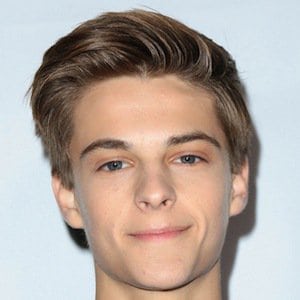 Corey Fogelmanis has not been involved in any serious relationships in his career. There are no records available about his past relationships.

Who is Corey Fogelmanis?

Corey Fogelmanis is an American actor. People mostly know him for his role as Farkle on Disney’s ‘Girl Meets World.’

Additionally, he has also appeared in several other movies and television series including ‘PrankMe’ and ‘I Didn’t Do It.’

Fogelmanis was born in Thousand Oaks, California on August 13, 1999. He was born to parents Dain Fogelmanis and Shannon Fogelmanis. Additionally, he has a sister named Baylee Fogelmanis.

Corey was exposed to the world of acting and show business from an early age. He began his stage career at just age 6. He is of American nationality. Furthermore, he belongs to the mixed ethnic background of Latvian, English, Norwegian, and Irish.

Talking about his education, Fogelmanis is currently in high school and plans to attend college after completing his high school education.

Corey Fogelmanis initially performed in several theatre productions. His acting career began at an early age of six. In addition, since then, he has performed in 18 productions around the country.

Corey performed in the production of Peter Pan and Tinker Bell at The Pasadena Playhouse in Southern California. Additionally, he appeared as T-Bird in Play in the TV series ‘House of Lies’ in 2012. He has appeared in several other movies and television series. At present, he has more than 8 credits as an actor.

Some other movies, short videos, and television series that Fogelmanis has appeared in are ‘#SquadGoals’, ‘PrankMe’, ‘Mostly Ghostly: One Night in Doom House’, ‘I Didn’t Do It’, ‘Partners’, ‘The Maiden and the Princess’, ‘Piper’s Picks TV’, ‘Disney Best Day Ever’, ‘Teens Wanna Know’, ‘Alexis Joy VIP Access’, ‘Ma‘, and ‘Disney 365’ among others.

Fogelmanis has not been linked with any award nominations in his career to date. Additionally, he has not revealed his current salary. However, he has an estimated net worth of around $ 2 million at present.

There are several rumors which suggest that Fogelmanis is dating actress Sabrina Carpenter. However, Sabrina has made it clear through her Instagram post that they are close friends and are not dating.

At present, there are no rumors concerning Fogelmanis and his career.

Talking about his body measurement, Corey Fogelmanis has a height of 5 feet 8½ inches (1.74 m). Additionally, he weighs around 64 kg or 141 pounds. Furthermore, his hair color is light brown and his eye color is blue.