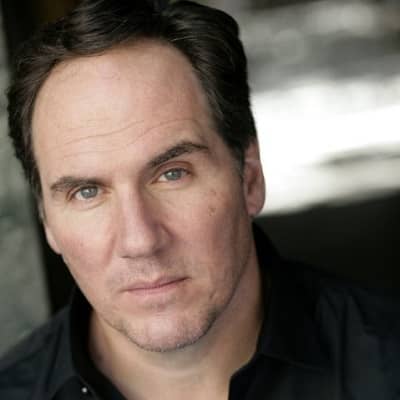 Corey Johnson was previously married to Lucy Cohu who is also an actress. She too has acted in many films such as The Queen’s Sister, Torchwood: Children of Earth, and Maigret. They married in the year 1994 and they had one son. Later they divorced in 2005 without citing any reason.

As for now he is single and living his life quite simple and uptight.

Who is Corey Johnson?

Corey Johnson is an American film, television, stage, and voice actor who is best known for the portrayal of Richard S. Fuld, Jr. on ‘The Last Days of Lehman Brothers’.

Furthermore, he has won the honorable mention for the best actor in a role for the film, The Conversation.

He is one of five children of his caring parents. However, he has not mentioned the name of his parents. His siblings include two brothers and two sisters. Among them, one of his brothers is a New Orleans-based sports talk radio personality.

He has an American Nationality but his ethnicity is not revealed. His birth sign is Taurus. Speaking on his education, he was educated at London’s Central School of Speech and Drama where he met his actress ex-wife, Lucy Cohu.

Before making his public appearances on TV he has appeared in many Primetime TV, theater, and Daytime television. He was first featured in his first film ‘The Innocent’ in the year 1993. Later, he gained fame and recognition as he appeared on several films including Saving Private Ryan, Black Hawk Down, A Sound of Thunder, Rollin’ with the Nines, The All Together, and Thick as Thieves.

In the year 2007, he made his Broadway debut as Jack Brennan in the British Play, Frost/Nixon. Since then, he as involved in other four-stage performances The Last Days of Judas Iscariot, Enron, A Streetcar Named Desire, and Man and Superman.

The year 2009 became very productive to him as he portrayed the role of Richard S. Fuld, Jr. in the British Television Film, The Last Days of Lehman Brothers. The same year, he also appeared in Universal Soldier: Regeneration and The Fourth Kind. Some of his latest presence in movies is Lair, The Mauritanian, and Morbius.

Furthermore, he was seen in television series such as Band of Brothers, Doctor Who, Beaver Falls, Nova, Comedy Showcase, 24: Live Another Day, The Saboteurs, The Windsors, Strike Back, The City and the City, Deep State, and co-produced the film ‘Grave Secrets’ in 2012.

Moreover, he has also lent his voice to several video games. Some of them are Broken Sword II: The Smoking Mirror, Vietcong: Fist Alpha, and Xenoblade Chronicles 2: Torna – The Golden Country among others.

Some of his important awards include the Action on Film Award, Festival Award, and Best Actor Award. He was also mentioned in the Honorable Mention in Independent Shorts Awards. He has also marked 5 nominations in his name for his extremely brilliant performance.

Talking about his financial details, he has not revealed his salary and there is not much information about his net worth too.

As for now he is secretive and living his life quite simple and uptight.

Johnson stands 5 feet and 11 inches tall and his weight is unknown. He has dark brown hair and irresistible blue eyes. Furthermore, his other body measurements will be updated soon.

Corey seems to be inactive on social media profiles. He enjoys his secretive life.