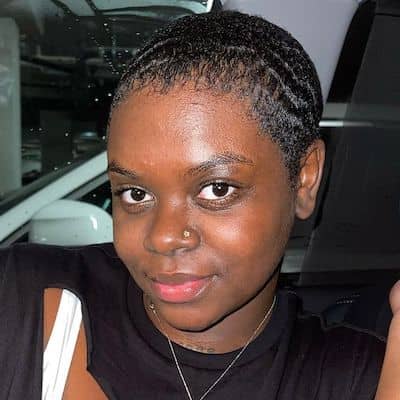 Cori Broadus, as per the reports is in a relationship with a guy from her school life. She is dating Ez but her boyfriend’s details are unknown.

Who is Cori Broadus?

Cori Broadus is an American singer and musical artist. The public noticed her for singing songs like Do My Thang, Daddy’s Girl, and more.

She was nominated for MTV Video Music Award under Best Video with a Message category. Also, she is known for being the daughter of a musical artist, Snoop Dogg.

She was born in California, the USA on 22 June 1999. The name of her mother is Shante Broadus and her father is Snoop Dogg.

Cori’s ancestry is All-American and has two brothers named Corde & Cordell. She also has a step-brother, Julian.

As per her academics, she attended and passed out from Ramón C. Cortines School of Visual and Performing Arts.

Spot on her face

Cori had suffered from a disease called Lupus. It was seen when a spot appeared on her face at 6 years of age. Her hair also fell down and she also lost weight.

After identifying the cause, she was put on medication and is now fully recovered.

Cori Broadus from an early age was interested in music. She started her career in early 2011 and sag her first track titled Do My Thang.

Moreover, Cori was also seen in a musical documentary Reincarnated in 2012 and in a Family/Comedy Trouble in 2019.

Currently, her estimated net worth is around $100k US. However, her salary and other earnings are unknown.

Her popular rapper father has assets of over $150 million. He sold his eight-bedroom house covered at 6,527 square feet at $1.83 million.

Recently, in Mid May 2021, this star kid tried to end her life because of mental health issues. She shared her awful experience via Instagram and talked about the issue which she has been facing for the last few weeks.

But she overcame this condition with help from her family. She said they gave her purpose of living and she realized that material things are less than life.

Regarding Cori Broadus’s body features, her height and her body weight are of normal size.

Moreover, her eyes are dark brown plus her hair color is black. She has a dark skin complexion.

Also, her YouTube channel has more than 7k subscribers.