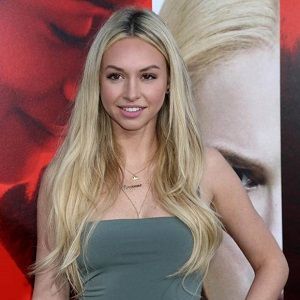 My heart is gold, but my vagine is platinum.

What is the relationship of Corinne Olympios?

Corinne Olympios is in a relationship. She is having an affair with Vincent Fratantoni.

Her boyfriend Vincent is the founder of several multi-million dollar companies, a philanthropist [and] a self-taught motivator.

The couple moved in together at their Scottsdale, Arizona home in February 2020.

She revealed about him and their relationship publicly in the show Bachelor: The Greatest Seasons Ever on 31st August 2020. Corinne said that they met each other through Instagram.

Previously, she dated Jordan Gielchinskyshe. Sadly, the couple broke up in 2017.

Prior, rumors were that she is engaged to her on and off boyfriend from The Bachelor series, Nick Viall. The news was that they got secretly engaged in March 2016. But later she revealed that they never got engaged.

Who is Corinne Olympios?

She is best known for appearing on the Season 21 of the American TV show The Bachelor. She also runs an online business in America.

What are the birth facts of Corinne Olympios?

She is an American by nationality and she is of Greek American ethnicity.

She was born into a rich family. Her parents were American businessmen. There is no other information about her parents.

She has not revealed any information about her childhood life and educational background.

There is no exact information about how Corinne began her career. Before becoming a reality TV star, she worked for her family’s multi-million dollar business, Armor Garage, a flooring supplier.

She runs an online business, which Chris Harrison revealed was started by her parents and is worth millions of dollars.

She rose to fame in 2017 as the media-proclaimed “villain” of the 21st season of The Bachelor. She competed for the heart of Nick Viall on the popular ABC reality show The Bachelor.

She has also done modeling for several magazines and music videos. She has appeared in music videos for Pitbull, Akon, and DJ Khaled. She was predicted as the winner of The Bachelor by Jennifer Aniston during a fantasy game on Jimmy Kimmel Live!

But there is no information regarding her salary.

Is Corinne Olympios involved in any rumors and controversies?

Rumors are that Corinne is dating Chad Johnson at the present time. The duo, who stole the spotlight in their seasons of The Bachelorette and The Bachelor respectively, took a photo together on Instagram, sparking rumors among fans of the reality dating competition.

Corinne Olympios has a height of 5 feet 1 inch. Her body weighs 55kg.

Besides these, she has blonde hair and dark brown eyes.

The investigation regarding the sexual assault of Corinne Olympios as a victim will not cease now! Click to know about the issue going on!

Corinne Olympios: her lunch with her boyfriend post-scandal, and more details about the sexual misconduct on BIP set! Read on it here!