Corliss Williamson is an American professional basketball player and coach. He is married to Joan Michelle White and is the father of three sons.

Corliss Williamson is a married man. He exchanged his vows with Joan Michelle White in July 2001. This couple together has three sons, Creed, Chasen, and C.J. Williamson. 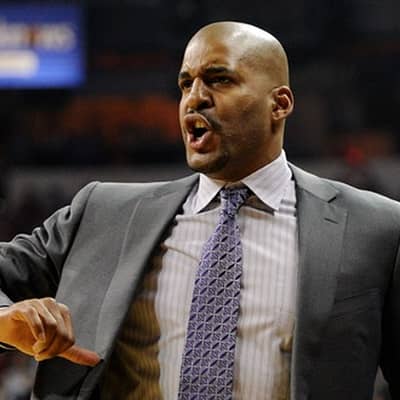 Who is Corliss Williamson?

Corliss Williamson is an American professional basketball player and coach. He played for four teams in his 12 years NBA career and is also a basketball coach.

He is best known for his last service as an assistant coach for Phoenix Suns.

This former basketball player was born in 1973, December 4, with the birth name Corliss Mondari Williamson in Russellville, Arkansas. His father’s name is Jerry and his mother’s name is Bettye Williamson.

Corliss studied at Russellville High School and he graduated from the University of Arkansas.

He belongs to Afro-American descent. His nickname ‘Big Nasty’ was given by his coach when he was 13.

Corliss Williamson played basketball from his school days. He used to play at his high school, where he achieved plenty of awards. Corliss was a three-time all-conference and all-state selection. In 1991-1992, he was named Gatorade National Player of the Year.

He also played at the University of Arkansas from 1992 to 1995. In 1992-93, he led the university to a 22-9 record and a sweet 16 appearance in the NCAA Tournament and was named Most Outstanding Player NCAA of the Tournament.

Afterward, Williamson led the team into the championship game in 1995 as well, but Arkansas lost to UCLA.

In the first round of 195 NBA Draft, the Sacramento Kings selected him for their junior season. Williamson played 79 games, finishing second to Alan Henderson for the NBA Most Improved Player Award in the year 1997-98. Sacramento traded him to the Toronto Raptors for the 2000-02 seasons, from where he played 42 games.

On 2004, August 4, he was again traded back to the Kings. Williamson has the distinction of being one of the few basketball players to win championships at three different levels, AAU, the NCAA with Arkansas, and the NBA with Detroit.

Corliss Williamson: Salary and Net Worth

There was a rumor that Corliss used to take drugs during the game. Later, the rumor came out as false.

Besides, there is no rumor and scandal regarding this player. He has managed to keep himself out of any controversies and uplifting his career.

You may also read about Douglas Henshall, Tolulope Ogunmefun, and Felipe Franco.