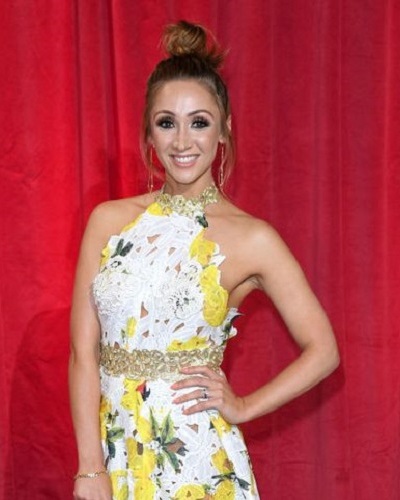 English actress Lucy-Jo Hudson is pregnant. This is her second baby. But it is her first child with her current boyfriend Lewis Devine. An excited and happy Lucy announced the news on her Instagram on 12 August 2019.

The Coronation Street actress Lucy-Jo Hudson could not hide the news anymore. She is pregnant with her second child. But it is the first child for her current boyfriend Lewis Devine.

Lucy-Jo was elated and took to her Instagram to share the happy news with her fans which number 159. 6k currently. She uploaded a picture of her ultrasound pregnancy scan and captioned it:

“This has been so hard to keep quiet, but today was the day @lewisdevine and I got to tell Sienna the best news!!!

“We are 13 weeks pregnant and so very excited to extend our little family.

“Sienna is so excited to be a big sister…. and Lew is ecstatic to become a daddy for the first time and I am so happy to be having another gorgeous baby! No other feeling like it.”

Lucy-Jo Hudson and the congratulatory comments

Her post was soon flooded by messages and comments to congratulate her for this milestone in her personal life. Several of her co-stars put up comments for her for this great baby news. Alex Fletcher, Chelsee Healey, Lauren McQueen, Stephanie Davis, Nikki Sanderson, Fiona Wade, and Gemma Merna were some who wished her congratulations.

Lucy-Jo Hudson and her relationships

Lucy-Jo, 36 met co-author Alan Halsall who is 37 now on the show Coronation Street in 2002. They began dating soon after and got married in 2009. Their daughter Sienna was born in the year 2013. They separated in 2016 but reunited some months later. But in 2018, they sit again. They continued to be friends and are co-parenting their daughter.

Later after her split with Alan, Lucy-Jo met Lewis Devine in a panto. They began a relationship and now this pregnancy! Alan went on to date another Coronation Street star, Tisha Merry.

Alan with new girlfriend Tisha was on a recent holiday in which he took his daughter Sienna. Lucy-Jo confessed at that time that it was tough to be away from her daughter who is now six. Lucy-Jo posted on her social media:

“My last day with Sienna  before she goes on holiday with her daddy.

“What a gorgeous day we’ve had @lewisdevine so thankful to have these two in my life … gonna miss you so much baby girl…. it never gets any easier.

“But I know you’ll have an amazing time! I’m already counting down the hours.”

Lucy-Jo did for sure miss her daughter Sienna for sure during the time that she is with father Alan.