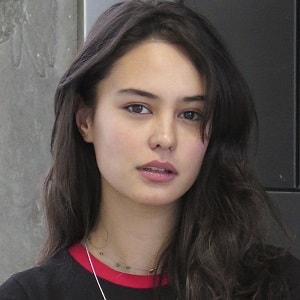 “It is such a great opportunity to be the face of a brand which I remember wearing as a little kid and running around in half-naked. Bonds is now getting very serious about fitness, and their range is amazing. It's beautiful and comfy”

“My dad brought me up to be a good person.”

What is the relationship of Courtney Eaton?

Courtney Eaton and Ross Lynch were dating for many years and they made their relationship public in September of 2015. They spent Christmas together with his family and they used to be so lovely and serious together.

Eventually, the couple did not last long, they separated in November 2017. Currently, there is no updated information about her relationship however, it seems she is single and focusing on her career.

Who is Courtney Eaton?

Courtney Eaton is an Australian model and actress. She is best recognized for her supporting roles as Cheeto the Fragile in the 2015 film Mad Max: Fury Road, and as Zaya in the 2016 film God of Egypt. She has been nominated for Gold Derby Awards for the category Best Ensemble Cast for ‘Mad Max: Fury Road’.

Eaton was born on 6 January 1996 in Bunbury, Western Australia, Australia. She has a birth sign of Capricorn. Her father’s name is Stephen Eaton and his mother’s name is not available. Her father is an IT manager, is Australian, of English descent and her mother is of Chinese, Maori, and Cook Islander Descent. Courtney has three siblings: Campbell, Danny, and Olivia. When she was a child, her dream was to become a medical or veterinary doctor.

Eaton studied at Bunbury Cathedral Grammar School and she was dropped out of school in 2012. She said that everyone doesn’t have to go to school.

During her fashion graduation at the age of 11, she was noticed by Christine Fox head of Vivien’s Models. Fox helped her to be a model at the age of 16. She participated as part of her modeling development in an acting workshop with Myles Pollard and she was auditioned for ‘Mad Max: Fury Road’ in 2015. She co-starred as Cheeto the Fragile, the youngest of the five wives of Immortan Joe in the film.

She also showed her skill in ‘Gods of Egypt’ in 2016 as Zaya, a slave girl, and the love interest of one of the main characters.  In the same year, It was announced that Eaton would be starring alongside Ross Lynch in the comedy film ‘Status Update’.

She has also made her appearance in the movies like ‘Newness’, ‘Angus, and Julia Stone: Chateau in 2017. She shot a real-time action thriller in the early summer of 2018 in Birmingham Alabama, with the film slated to release in 2019.

She has been nominated for Gold Derby Awards for the category Best Ensemble Cast for ‘Mad Max: Fury Road’.

Courtney Eaton: Net Worth and Salary

As of 2022, it is estimated that she has a net worth of around $700,000 and her main source of income is from her acting carer. There is no updated information about her salary.

She has been to a couple of rumors recently. Eaton was spotted with a prominent stomach bulge during a romantic dinner date nearby her place. Twitter has also reacted to the Courtney Eaton pregnancy rumor. Her rep has denied talking about Eaton’s personal life so it has neither been confirmed nor denied.

Another rumor is being heard that she is going to announce her retirement from acting at the age of 23. Still, it is not confirmed.

She is much more active in social media and she has around 8k followers on Instagram, above 51k followers on Twitter, and around 86k followers on Facebook. She loves to upload photos and videos on social sites.