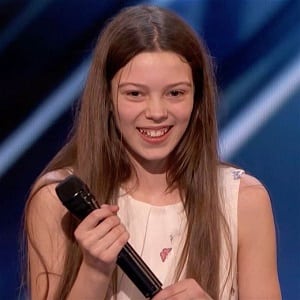 Courtney Hadwin is just 13 years old. She is too young to get involved in any serious relationship affairs. She has a huge career left ahead of her.

Who is Courtney Hadwin?

Courtney Hadwin is a British Singer. She became an overnight sensation after her show-stopping performance in ‘America’s Got Talent’. Additionally, she received the Golden Buzzer from Howie Mandel.

Hadwin was born in Hartlepool, England on July 6, 2005. She is the daughter of Paul and Annmarie Hadwin. In addition, she became interested in the world of music since her childhood years. She is of British nationality. Furthermore, she belongs to an English ethnic background.

Hadwin initially performed ‘Say Something’ by Great Big World at The Academy at Shotton Hall’s lunchtime open mic session in 2015. Additionally, she also appeared on ‘The Voice Kids’ in 2017. However, she received widespread fame after she performed the Redding’s 1968 hit in the ‘America’s Got Talent’ which earned her a golden buzzer from Howie Mandel.

Furthermore, Hadwin was compared to Janis Joplin, who won a record deal as a youngster at a festival. She has previously sung in the public for years. Additionally, she also narrowly missed out on the top prize on The Voice Kids UK. She also spent two years trying to raise money to fund her dream of becoming a singer. Presently, she has a devoted fan base online.

Hadwin has not revealed her current salary. Additionally, there are no details available about her estimated net worth at present.

Hadwin has not been part of any notable controversies in her career. At present, there are no rumors concerning her life and career.

Talking about her body measurement, there are no details available relating to Hadwin’s height and weight. Her hair and eye color is dark brown.