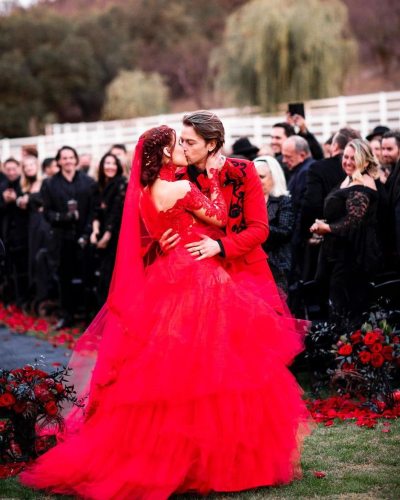 Wedding of Courtney and Chad Duell

During their wedding, they wore matching red wedding ensembles while their guests donned the gothic mood wearing an all-black outfit. Hope’s wedding gown was a voluminous tulle and scarlet lace details from head-to-toe while Duell’s wore a suit that was completed with black embellishments and a rose boutonniere.

Their wedding was attended by Tracey Bregman, Hunter King, and Katherine Kelly Lang. Chad proposed to her on Valentine’s Day during a Malibu beachside in February after five years of dating. Courtney revealed,

“He read me the most beautiful poem, because I love poetry, and I started choking up. He then told me to close my eyes and turn the other way ’cause he had to ‘set something up.’ Then he comically fumbled behind me to distract me from what he was really doing — and when I turned around, he was on his knee!”

They were introduced at a party by Chad’s former General Hospital co-star Brian Craig. They immediately hit it off but were hesitating to start the relationship. The proposal was unexpected to her and better than what she had imagined.

Also read How many engagement rings have Paris Hilton worn? Which one is the most expensive?

How much is Courtney Hope’s net worth?

Courtney Hope’s net worth is $4 million as per Celebrity Net Worth. She has worked in movies Make Out, The Divergent Series: Allegiant, Swealter, Prowl, Mad Bad, Mrs Harris, and more.

Likewise, she has worked in TV series like The Young and the Restless, The Bold and the Beautiful, Transparent, Bones, NCIS, NCIS: Los Angeles, Criminal Minds, Grey’s Anatomy, and more.

Courtney Hope is an American actress and producer best known for her roles in video games series such as Control and on the CBS daytime soap operas The Bold and the Beautiful and The Young and the Restless. Her full name is Courtney Ann Hope who is also a fitness instructor. Read more bio…