Posted by MarriedBiography Posted on April 14, 2020 | In Child , Dating , Relationship
Share this 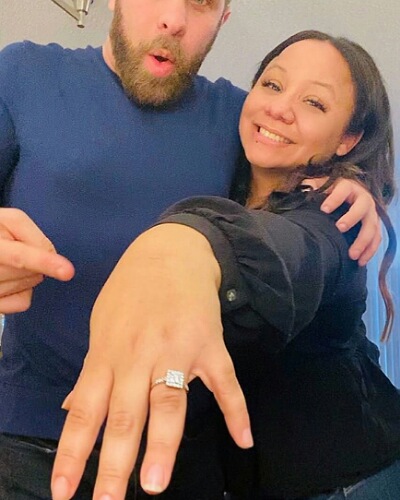 The daughter of the host on Today Show,  Al Roker, Courtney Roker is engaged. Her boyfriend Wesley Laga proposed to her the last weekend and she accepted his marriage proposal.

Recipe developer and the daughter of Today host Al Roker, Courtney Roker is engaged to her boyfriend Wesley Laga. Over the last weekend, Wesley went down on one knee and asked for the hand of Courtney in marriage. This happened at their home. The couple was to travel to Paris this weekend but due to the ongoing Covid-19 scare, they postponed it. And Wesley ended up popping the question to her at home.

Revealing her engagement, Courtney wrote on her Instagram for her 8k fans:

“Life sometimes takes you in a different direction for a reason,”

“We should have been in Paris, but with how the world is at the moment, it was placed on hold. Instead, Wes brought Paris to me with the music, lights and live cam shot of the Eiffel Tower on our TV.”

“I said yes to my best friend last night and I am over the moon!” the bride-to-be added. “Thank you Wes for making me your partner in crime for life. I love you ❤️”

Courtney is a loving daughter and last August, she had uploaded a photo of herself with her father Al Roker, younger brother Nick Roker, and boyfriend Wesley along with her mother and captioned it:

“The 3 most important men in my life,”

The father of the bride-to-be Courtney, TV host Al Roker was, joyous on learning of this and wanted to share the news with his fans as well. Therefore  he posted on his Instagram for his 629.4k followers:

“I was waiting to get the ok, but now that it’s on her insta, we are so thrilled the @djweslaga asked @ouichefcourtney to marry him,”

“#shesaidyes Could not be more thrilled for these two.”

Al Roker put up a collage of the couple. Al Roker is a devoted and loving father. Last year on Father’s day, he told NBC:

“Courtney always liked to cook. She loved food presentation, too. I remember when she was 6 or 7, she would go out and pick flowers to decorate the plate.”

He also revealed that Courtney told him that he has to listen to his kids.

Congratulations pour in for the couple

After the proud father Al Roker posted about his daughter’s engagement, many of the weatherman’s colleagues gave congratulatory remarks to him. Natalie Morales commented:

“Amazing! Congrats to @ouichefcourtney and it’s so nice to have good news during this time,”

Al Roker is a weatherman and television star from America. Furthermore, he is also an actor and author. He is popular as being the weather anchor on NBC’s Today.

Moreover, Al also holds the Guinness World Record for reporting for 34 hours. In addition, he has also written several novels such as The Morning Show Murders, The Midnight Show Murders, and The Talk Show Murders. More info…