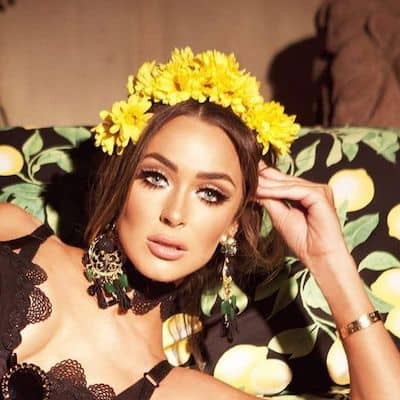 What is the relationship of Courtney Sixx?

Courtney Sixx is currently married to musician and songwriter, Nikki Sixx. Her husband is also a photographer and radio host.

Their first daughter Ruby was born in July 2019.

Walking the Aisle Together

They exchanged vows on 15 March 2014 in a lavish wedding ceremony in Greystone Estate, LA. The function was inspired by the movie, Marie Antoinette and it has an aisle of bushes.

The bridesmaid wore silk gowns and the bride was seen wearing an ivory strapless gown with ruffle trim and strands of diamonds.

On her 7th wedding anniversary, Courtney shared an adorable picture where she and Nikki are glancing at each other in a romantic way.

Who is Courtney Sixx?

Courtney Sixx is an American celebrity’s wife and model. She is mostly known for being the third wife of a singer, Nikki Sixx.

She is also an Entrepreneur and has her own bouquet company.

She was born as Courtney Erica Bingham on 05 Sep 1985 in Santa Monica, California, USA. The name of her father is unknown and her mother’s name is also not disclosed.

Courtney’s ancestry is Caucasian and talking about her academics, she has attended high school.

Courtney Sixx from her high school days started to do modeling. In those days, she was signed by an agency named Wilhelmina Models.

She also did screen appearances in Shoot’er in 2012 and in Beautiful Danger Animated TV Series in 2017. She also produced a comedy movie titled InAPPropriate Comedy (2013).

Other than this, she is also a blogger and has the website How2Girl.com. In this, she shows women very amazing DIY projects. Her How2Girl Radio show is also popular and airs on iheartradio.

As of 2022, her estimated net worth is around 1.1 million dollars. However, her salary and other earnings are unknown.

She has founded a bouquet company named Bouquet Box. It specializes in floral arrangements.

This star mode is keeping herself away from rumors at present.

Regarding Courtney Sixx’s body features, her height is 5 ft 10 inches and her body weight is 55 kg. Moreover, her eyes are blue plus she has black hair.

Courtney is active on social networking sites and on Facebook has over 56k followers.

Moreover, her Instagram is followed by more than 259k followers and has over 253k followers on Twitter.