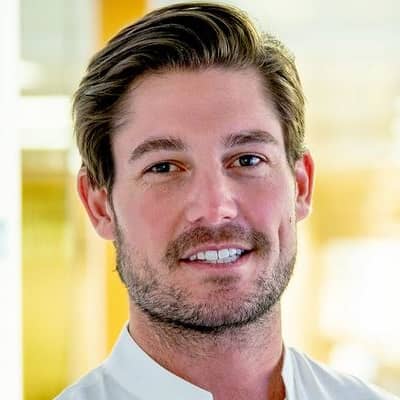 At the moment, Craig Conover’s relationship status appears to be single. He doesn’t seem to date anyone or engaged in any relationship.

Previously, he was dating  Naomi Olindo. His ex-girlfriend was also a star in  Southern Charm. The two dated for a long time from April 18, 2016, and also confirmed their engagement.

He also gave her the engagement ring in the show between their fans. And on 22nd September 2017, it was said that the couple has separated.

Who is Craig Conover?

He is popular for appearing as one of the cast members on the Bravo series known as Southern Charm.

Craig was born on born on February 9, 1989. His birthplace is Fenwick Island, Delaware, United States. He holds an American nationality and is of Dutch ethnic group.

His father’s name is Craig Conover Sr was a lacrosse player. Likely, his mother’s name is Martha Foster Conover was a gymnast.  He has a brother Christopher who is a soccer player.

Growing up in a family engaged in sports, he was also interested in playing different sports. He started playing baseball during his college days. But after an elbow injury, he quit playing it.

Craig has his schooling at Indian River High school where he graduated in 2006. He also won a National Championship in his high school business competition.

And he joined the College of Charleston. In 2009, he graduated from the institution with a bachelor’s degree in finance. He also furthered his education at Charleston School of Law.

Having his degree in law degree, he has his intern at Berkeley County Public Defender’s Office, later acting as a litigation assistant at Anastapoulo Law Firm. He also represented different neglected and abused children working in the Guardian Ad Litem program.

Conover is also a member of the Triton Relief Group. It delivers essentials and supplies to disaster-stricken residents. He has documented one of his experiences on Instagram in the aftermath of Hurricane Florence.

Conover owns a cleaning business that was own by his father. He also launched his passion project, Sewing Down South, with a full line of products.

Craig came into the limelight after cast in the  TV reality series “Southern Charm”. He debuted on March 3rd, 2014 and since then he has been its leading cast member.

There, he has worked with Shep Rose, Austen Kroll, Thomas Ravenel, Cameran Eubanks, Kathryn Dennis, Landon Clements. Apart from it, he also appeared in Summer House in 2017, and Reprisal in 2018.

Being a cast member of the show, Craig also must have a good earning.

Craig made a comment about Madison’s love life with Austen Kroll’s relationship which drew him into some controversies. Later, he said that he regrets making that comment.

Craig Conover stands tall with a height of 6 feet 3 inches and weighs around 75 kg. Talking about his appearances, he has brown colored hair with brown eyes.

You may also read the bio of Priscilla Quintana, Bill Wolff, Susan Rice, and Sam Witwer.