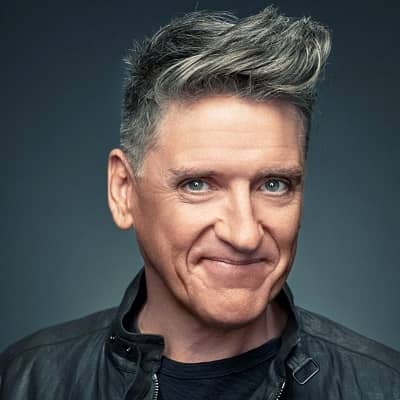 I don't know now if I'm funny. I just keep talking and hope that I hit something that's funny

Why do people do things that they fear? It may be that the fear contains information. Something can be interesting if you get to the other side of that fear

I dropped out of high school when I was 16, after I had a huge argument with my English teacher over the meaning of the word ’existentialism.’

Craig Ferguson is a married man. He married thrice in his life. His wife is Megan Wallace Cunningham (art dealer). They exchanged vows on 21 December 2008.

This couple is blessed with one kid. Their son Liam James Ferguson was born in 2011.

Craig’s first wife was Anne Hogarth. They wedded on 20 October 1983 but separated in 1986. Then he married Sascha Ferguson on 18 July 1998. Sascha is his second wife. They have one child Milo Hamish Ferguson (2001) together but they divorced in 2004.

Who is Craig Ferguson?

Craig Ferguson is a Scottish-American host and comedian. He is also an actor and author. Craig is popular for the show The Late Late Show with Craig Ferguson.

He was born on 17 May 1962 in Springburn, Glasgow, Scotland. His father’s name is Robert and his mother’s name is Janet Ferguson.

Craig has two brothers Scott and Lynn and a sister Janice. He has dual nationality of Scotland and America. In Jan 2008 he passed the U.S. citizenship test and in Feb he became an official US citizen.

He belongs of Scottish-Irish descent.

He has attended Muirfield Primary School. For further studies, he enrolled at Cumbernauld High School.

Craig Ferguson was an apprentice for the American company, Burroughs Corporation. He also joined bands for Night Creatures, Exposure, and Ana Hausen.

In 1998, he started his on-screen career with TV shows Red Dwarf, Chelmsford 123, and The Laughter Show. He was also seen in The Lionhearts, The Legend of Tarzan, SpongeBob SquarePants, Craig Ferguson: I’m Here to Help, Still Game, and more.

He has written plus hosted this show which ran for a total of 2058 episodes.

Besides TV and music, Craig has also contributed to the big screen. He was first seen in the movie Modern Vampires (1998). This actor wrote and acted in The Big Tease, Saving Grace, and I’ll Be There.

This anchor has a net worth of $30 million. He also receives a salary of $8.5 million per year.

Regarding Craig Ferguson’s body features, his height is of 6 ft 2 inches and his body weight is average. Looking at his pictures, the color of his eyes is hazel and his hair is in grey color.

Craig is available on social sites. He is on Twitter which has over 2.6 million followers. He joined this site in Feb 2010.

You may also read the bios of Gina Brillon, Hannah Bagshawe, and Brandi Boyd.