Talking about his relationship, Craig Melvin is married to Lindsay Czarniak.

He started having an affair with Lindsay in October 2009. The couple met for the first time in a charity gala that Czarniak was hosting. Melvin proposed to her many times in the past but she denied it.

After two years of relationship, they got married on 15th October 2011 at the Church of the Holy City in 16th Street NW in the presence of their family members and colleagues. 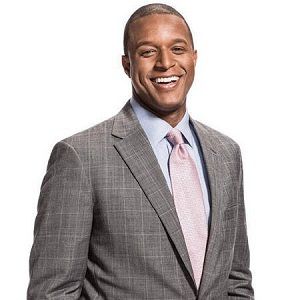 Who is Craig Melvin?

Craig Melvin is an American journalist and news anchor, working for NBC News and MSNBC as an anchor and NBC News correspondent.

Currently, he was named a news anchor on NBC’s Today.

Craig was born in  Columbia, South Carolina, the United States on May 20, 1979, to parents Lawrence Melvin and Betty Melvin. He has two siblings namely, Rev. Lawrence Meadows and Ryan Melvin.

His brother Lawrence died at the age of 43 due to colon cancer after battling for four years. Further, the doctors removed a baseball-sized tumor from his abdomen.

Aftermath, his other brother Ryan tested for colonoscopy for prevention.

Whereas, he belongs to American nationality and mixed (African-American) ethnicity. His birth sign is Taurus.

On talking about his profession, his career as a journalist flagged off rather early in his life. Even during high school at Columbia High, he also worked as the teen reporter for WIS News 10, a local news channel. Additionally, he returned to WIS News after graduating from college in 2001.

Whereas he also worked as a weekday anchor, a features reporter, and eventually a weekend news anchor. Likewise, he was also popular for the ‘Craig Cam’ live shows. Unfortunately, he left WIS in 2008 and shifted to WRC-TV in Washington as a reporter and anchor for the next three years.

During this time, he was also the anchor for many weekend broadcasts. During 2011, he also earned his big break and joined MNSBC as Dayside Anchor and relocated to New York City. Since 2011, he has also worked as an anchor and co-host for MSNBC Live weekend and MSNBC Live.

Currently, he is also a part of NBC News. Then, he initially started working as a news correspondent for NBC News in 2012 and later became an anchor. Similarly, his most popular show for NBC News was ‘Weekend Today’ where he was the co-anchor from 2015 to 2018.

In fact, he has also appeared as a correspondent on ‘Sunday Night with Megyn Kelly’ and is a contributing anchor for ‘Dateline NBC’. In 2018, he was also named the co-anchor of NBC’s Today’.

He has carved a name for himself by covering important events and breaking news. Similarly, his political acumen shaped during college helped him report during the elections and Republican and Democratic National Conventions. Whereas, he was the official NBC reporter during the Rio Olympics in 2016.

In addition to reporting, he has also conducted many interviews with famous personalities, such as Feidin Santana, Bill Clinton, and Nicki Minaj.

In recognition of his achievements, he was also named the keynote speaker at the RTDNA-Loyola University Chicago program ‘Anchor Leadership: Truth and Trust in the Digital Age.’

On talking about his lifetime achievements and awards, he won Emmy Award for his reporting in 2006 and his name was listed in Best Anchor by the South Carolina Broadcaster’s Association.

On talking about his salary and net worth, he earns $3 million per year. His net worth is around $9 million as of 2022.

Craig Melvin has a height of 6 feet. In addition, he weighs is 84Kg. Craig’s hair color is brown and his eye color is black.