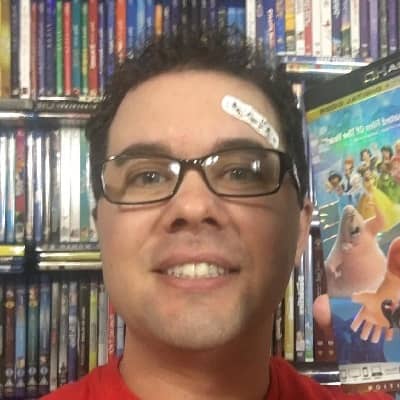 Crazy Nate hasn’t yet married neither seems in any love affairs. So, he is possibly single. Further, he is very secretive regarding his private life.

In further days, if he opened up anything regarding his love life then we will definitely update it.

Who is Crazy Nate?

Crazy Nate is a well-known American YouTube star. He is better recognized for his self-titled YouTube channel where he uploads Hidden Easter Egg videos.

Crazy was born on the 2nd April of 1986, in Phoenix, AZ. He is of American nationality unfortunately his ethnicity is unknown.

The identity of his family including his parent and siblings hasn’t yet disclosed. However, his mom was once featured in a video titled ‘100,000 Subs! Secret Chicken Noodle Soup.’

Also, he hasn’t revealed his educational qualifications in the media.

Crazy started his YouTube journey on the 14th of April in 2016 while he uploads his first YouTube video titled ‘Jurassic World Easter Eggs & What You Missed’. The video has gained over 1.5m views with 14k likes till now.

Since then, he has uploaded nearly 145 videos on his self-titled YouTube channel to date. As of now, the channel has more than 542k subscribers and his channel is already verified.

Nate’s YouTube channel is all the favorite movies like Pixar, Marvel, Star Wars, Disney, and so on. In which he points out hidden story clues within the film and tried to connect with the fans.

His most views videos are, That’s Extra Easter Eggs for Cars 1, Cars 2, and Cars 3, Disney/Pixar Movies: Everything You Missed, Movies: Easter Eggs & Bloopers. Most of the videos surpassed the millions of views in each respective video.

Additionally, he has another YouTube channel too under the name ‘the Late Nate Show.’ The channel has gained more than 6.08k subscribers till now with 72 videos.

To date, the YouTube star has not been part of any sort of rumors and disputes that create headlines in the media. Also, he stays miles away from any controversial act that could hamper her professional and personal life.

Crazy might have earned a reasonable amount of wealth throughout his career. But, he hasn’t yet revealed the exact figure of net worth, yearly income, and other assets.

According to Social Blade, he earned in the range of $542 to $8.7 thousand through his main YouTube channel. The estimated amount would be around $6.5 thousand to $104.1 thousand per year.

Similarly, he has also received a fair amount of fortune through his second YouTube channel.

The Youtuber star has a decent height and average weight. But the exact figures of his body physics are not available. Nonetheless, he has an attractive blue pair of eyes and has a born hair color.

Besides YouTube Crazy is active on Instagram under the username @imcrazynate where he has more than 4.4k followers. He is also active on Twitter with nearly 4.9k followers.

Furthermore, he has more than 12k followers on his Facebook account. He uses Snapchat under the username @imcrazynate.