Crispin Glover is an American actor, filmmaker, musician, and author. He is known for his role as George McFly in Back to the Future. 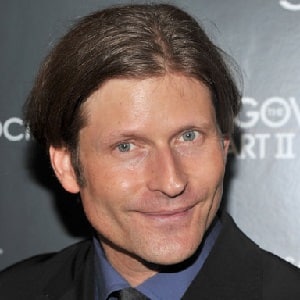 I do like things that are not necessarily a reflection of what is considered the right thing by this culture. Somehow, promoting that status quo I find uninteresting. I have thought about that more as the years have gone on, and it's a feeling that I would not have been able to describe 15 years ago as I can now. But at the same time, I don't intellectualize it, I don't have a written manifesto or just say this is the only thing I can do or will do.

There's a tradition in the American media to ask actors what the movies are about, but it always seems wrong. It seems like the directors and the writers only often see an actor quoted in what a movie is about.

[on strip clubs] The ecdysiast's art, the appreciation of the female form, the prurient music handpicked by the dancers contribute to an atmosphere I truly enjoy.

What is the relationship of Crispin Glover?

Crispin Glover previously dated American Actress Fairuza Balk. From 2000 to 2002, he was in a relationship with American singer, Jessicka. Additionally, she also dated an American model, Alexa Lauren.

Glover was in a relationship with Russian Model Marina Drujko from 2004 to 2005. She also dated American actress, Courtney Peldon in 2005.

From 2008 to 2009, he was together with the American model, Vanessa Marra. In 2013, Glover dated American actress, Trisha Paytas. At present, Glover is believed to be single.

Who is Crispin Glover?

Crispin Glover is an American actor and director. People mostly know him for his role as George McFly in ‘Back to the Future’ and Layne in ‘River’s Edge’.

His father is an actor and his mother is an actress and dancer. He developed a keen interest in acting in his childhood years. He is of American nationality.

Furthermore, he belongs to a mixed ethnic background of Bohemian Czech, Swedish, German, and English.

Glover initially began his career in acting at the age of 13. He landed his first role in the TV movie, ‘Best of Times’. In 1982, he appeared in the TV series ‘Crisis Counselor’. Additionally, he portrayed the role of Jack in ‘My Tutor’. He also played Archie Feld in the TV movie ‘High School U.S.A.’.

Some other movies and television series that Glover has appeared in are ‘American Gods’, ‘We Have Always Lived in the Castle’, ‘The Con Is On’, ‘Aimy in a Cage’, ‘Texas Rising’, ‘Influence’, ‘Freaky Deaky’, ‘Hot Tub Time Machine’, ‘The Donner Party’, ‘Beowulf’, ‘Epic Movie’, ‘Drop Dead Sexy’, ‘Charlie’s Angels: Full Throttle’, ‘Bartleby’, ‘The People vs. Larry Flynt’, ‘Even Cowgirls Get the Blues’, ‘Little Noises’, ‘Family Ties’, ‘Racing with the Moon’, ‘30 Door Key’, and ‘Even Cowgirls Get the Blues’ among others. Furthermore, Glover also has 3 credits as a producer and 3 credits as a director.

Glover has not revealed his current salary. However, he has an estimated net worth of around $6 million as of 2022.

Glover’s debut as a director was controversial. Furthermore, his replacement in the movie ‘Back to the Future II’ also attracted numerous criticisms. At present, there are no rumors concerning his life and career.

Talking about his body measurement, Crispin Glover has a height of 6 ft 1 inch. Additionally, he weighs around 75 kg.

Glover is active on social media. He has a huge number of followers on social networking sites such as Instagram and Twitter. He has more than 30k followers on Twitter.

In addition, he has over 19k followers on Instagram.

To know more about Paris Berelc, Aimee Teegarden, and Katherine Waterston, please click on the link.