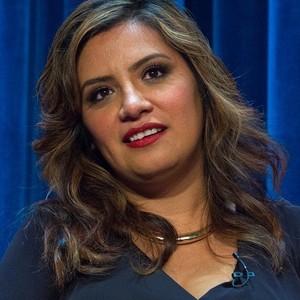 Two brothers and a sister, my niece, my nephew... we're a very small group. We're very close, very tight-knit. We spend every holiday weekend together

If I'm laughing, you know I'm either very happy or very sad. I cope with things with jokes.

Cristela Alonzo has kept her personal life private and out of the spotlight. She usually doesn’t talk about her private life in media and public. She prefers people focusing on her work rather than her personal life. She hasn’t mentioned about her affairs publically and has managed to keep it low profile. There is no any record of her marriage and divorce till now.

She has not clarified about her married life, affair, boyfriend and spouse till the present time. It seems like she is sharpening her strength and skills to make her all dreams come true rather than being stuck in a relationship. She is currently focusing on her work and it seems like she doesn’t have time for love affairs. According to the records, she is possibly single at the present time.

Who is Cristela Alonzo?

Cristela Alonzo is an American stand-up comedian, actress, writer, and producer. She is best known for starring in the ABC television series Cristela since 2014. She became the first Latina to create, write, produce, and star in her own network show Cristela.

Alonzo has also appeared in episodes of the TV series Sons of Anarchy, The Book Club, Hey It’s Fluffy!, and General Hospital. She also wrote for the TV series Mind of Mencia in 2006. Since 2014, she has been a co-host and guest on the TV series The View.

Cristela Alonzo was born on 6 January 1979, in San Juan, Texas, USA. She is the daughter of Natalia Gonzalez and Adalberto Alonzo. She is the younger daughter of four children. Her mother worked double shifts at a Mexican restaurant for about 20 years.

Her mother Natalia raised her and her three siblings as a single parent. Alonzo said she never met her father, who died in 2009. She lost her mother in2002. She grew up in the U.S. town that happens to be close to the border of Mexico San Juan, Texas, in the Rio Grande Valley. Alonzo is an American by nationality and she is of Latin-American ethnicity.

She did a 30-minute segment of Comedy Central’s The Half Hour on June 7, 2013. Cristela has appeared on Conan, Late Late Show with Craig Ferguson, Gabriel Iglesias Presents Stand-Up Revolution, Showtime, Last Comic Standing, The Late Show with Stephen Colbert and Live at Gotham. She is the first Latina to create, write, produce, and star in her own network show Cristela.

Rumors are that she is in a long-term relationship with fellow stand-up comedian Stephen Halasz. She has not confirmed the news about her relationship with Stephen. Currently, there are no other desperate rumors regarding his personal and professional life. It seems he is doing best job without harming others and has been a straight person in his life, for which he has not been in any controversy yet.