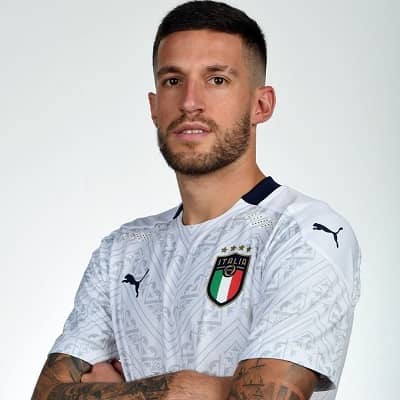 Cristiano Biraghi is currently married to his wife Sara Bilotta. The two were in a long team relationship for a while until their marriage on the 3rd of June, 2018.

Not much else is known about their marriage due to Biraghi’s private nature. Still, we do know that the couple has a daughter named Victoria.

Who is Cristiano Biraghi?

Cristiano Biraghi is a popular Italian football player. He is well known as the left-back of Serie A club Fiorentina and the Italy national team.

He also made it into Italy’s squad for the entertaining Euro 2020 championship.

Cristiano Biraghi was born on the 1st of September, 1992 in Cernusco sul Naviglio, Lombardy, Italy. As of now, his age is 28. His nationality is Italian and his ethnicity is also Italian.

Biraghi has not revealed anything regarding his parents as of now. This is because he is quite private when it comes to his personal life. He has also not shared any information about his siblings so he might be a single child. Biraghi was passionate about football from a young age and even made it into the Youth team of Internazionale at just 13.

Biraghi has not revealed anything regarding his education as of yet.

Biraghi played his first match for the senior team of Internazionale on the 24th of November, 2010 in a match against Twente. And after a season with them, Inter loaned Biraghi to Serie B club Juve Stabia.

Just a year later, he joined another Serie B club A.S. Cittadella on loan. Biraghi played really well at his left-back position in his first season. As a result, Cittadella even bought half of Biraghi’s registration rights from Inter for 150k Euros.

Biraghi returned to Inter in 2014 and signed a four-year contract with them. But he didn’t play for Inter too much but rather for clubs Chievo and Granada CF on loan.

In 2016, Biraghi was signed by Pescara and after a season with them, he was bought by Fiorentina. After 2 seasons with Fiorentina, Biraghi made his second return to Inter on a temporary deal. But Inter didn’t permanently buy him and so, he is still the left-back of Fiorentina currently.

Biraghi joined the senior team of Italy in September of 2018, for games in the UEFA Nations League. He played his first match for the team in a 1-1 draw against Poland.

Biraghi even scored the winning goal in the 92nd minute against Poland in a later game that won Italy the match. Biraghi was also a part of Italy’s squad in the entertaining Euro 2020 championship.

Biraghi stands at a height of 6 feet 1 inch tall and his weight is roughly 78 kilograms. He has a great lean and athletic physique perfect for football. Birgahi’s eyes are brown and his hair is black in color.

Get to know more about Giacomo Bonaventura and Giorgio Chiellini as well.