Professional football player and captain of the Portugal national team, one of the best players in Football History.

Ronaldo has been in 29 relationships with many popular and beautiful women in the world. The Portuguese ace has been linked to brief encounters with the sex-tape scandal with Paris Hilton. He was also found in bed with Kim Kardashian in his mansion.

Furthermore, his name was also linked up with star Gemma Atkinson. He was also in an alleged relationship with Bipasha Basu (2007). Somewhere along the way, he was also the father of a child, Cristiano Junior. However, the identity of the young boy’s mother has always remained a mystery.

His most successful relationship appears to have been with Irina Shayk, with whom he was seen several times between 2010 to 2015. But he also got broke up with her, after he found out that Erina is having some personal issues with his mother.

Who is Ronaldo dating now?

Currently, he is in a relationship with his girlfriend Georgina Rodriguez. She is a Spanish model. They are dating since 2016.

Luckily, she is already the mother of five children, Cristiano Junior, twins Mateo, and Eva including Ronaldo’s kids from his past affair.

In October 2021, the couple revealed that they are expecting twins via an Insta post.

Update: Sadly, the couple who were expecting twins, one of their babies died. And the other child is a daughter Bella Esmeralda born on May 7, 2022. 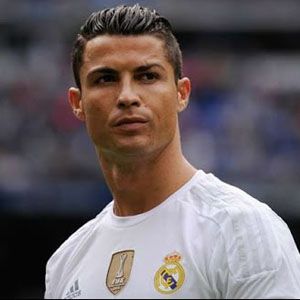 I see myself as the best footballer in the world. If you don't believe you are the best, then you will never achieve all that you are capable of.

To be honest, there are no problems between me and Messi. People have their own opinions about who they think is the better player. It is what it is, but there is no rivalry beyond games and what happens on the pitch.

Who is Cristiano Ronaldo?

Cristiano Ronaldo was born on 5 February 1985 in Funchal, Madeira, Portugal. He was the youngest child to Maria Dolores dos Santos Aveiro and José Dinis Aveiro.

His father served his country as a municipal gardener and also worked as a part-time kit man. As he lost his father at a very young age, Ronaldo was raised by his mother Maria. As she worked as a cook. His father was a great admirer of U.S. President Ronald Reagan so he gave this name to his son “Ronaldo”.

Ronaldo’s childhood wasn’t easy at all. At the age of 15, he suffered from a racing heart. He grew up with his one older brother, Hugo, and two older sisters, Elma and Liliana.

Furthermore, his family is Catholic. From the very beginning of his childhood, he had a keen interest in football. He started to play football at a very young age. Cristiano Ronaldo is Portuguese by nationality. Also, he holds Portuguese ethnicity.

Concerning his education, he got suspended from school after throwing a chair at his teacher. At that time Ronaldo said, the teacher disrespected him so that he lost his temper. Besides these, there are no details on Cristiano Ronaldo’s education.

Cristiano Ronaldo began his professional football career with Sporting CP at the age of 16. As a youth, he played for the club’s U16, U17, and U18. He was the first player to play for the youth team, the B team, and the first team, all within one season.

On 16 August 2003, Ronaldo made his debut in Premier League in a 4-0 home victory over Bolton Wanderers. The debut goal for Manchester United came with a cracking free kick in a win over Portsmouth on 1 November 2003. During his six years of the period with United, he netted 118 goals in 292 appearances.

Ronaldo moved to Real Madrid for a world-record transfer fee of €94 million with a buyout clause of €1 billion. Almost 80,000 fans attended his presentation at the Santiago Bernabeu, breaking the 25-year record of Diego Maradona at Napoli. As a forward, Ronaldo received the number 9 shirt as his favorite No, 7 was already worn by the club captain Raul Gonzalez.

On 29 August 2009, Ronaldo made his debut against Deportivo La Coruna and scored from the penalty spot in Madrid’s 3–2 home win. As of now, Ronaldo becomes the all-time top scorer of Real Madrid and has a record of scoring 407 goals. On 15 December 2016, Ronaldo reached his 500th club career goal in his professional club career.

Recently, in the 2016-17 UEFA Champions League, the two goals against Bayern Munich make him the first-ever player to score 100 goals in the UEFA club competition. And on the second leg, Ronaldo perfectly scores a hat-trick which led him to reach his 100th UEFA Champions League goal, as usual, this time he also becomes the first player to do so.

Ronaldo scored another hat-trick in the following Champions League game, as Real Atlético Madrid 3–0 in the semi-final first leg.

As a result, his hat-trick made him the first player to reach 50 goals in the knockout stage of the competition. In the 2017 final, he scored two goals in the victory against Juventus and became the top goalscorer for the fifth straight season. With 12 goals in the tournament, he reached his 600th senior career goal.

Concerning his game as a teenager, he represented the national side in U17, U21, and U23. In addition, he appeared in 34 matches and scored 18 goals. At age 18, Ronaldo earned his first senior cap in a 1–0 victory over Kazakhstan on 20 August 2003. During the qualification for the 2014 World Cup, Ronaldo scored a total of eight goals.

A qualifying match against Northern Ireland earned him his 100th cap. As a team captain, Ronaldo lifted the 2017 Euro Championship as the first-ever triumph in a major tournament.

He was awarded the Silver Boot as the joint second-highest goalscorer, with three goals and three assists. His performance was excellent throughout the competition which named him on the team of the tournament for the third time in his career.

Ronaldo has won 4 Ballon d’Or to date after losing four straight years to Lionel Messi. He achieved the feat, 3 times as a Real Madrid player and once as a Manchester United player. Ronaldo won the Premier League in the 2006–07, 2007–08, and 2008–09 seasons.

Besides this, he has also won 2 La-Liga titles in 2011-12 and 2016-17 seasons in Real Madrid. Furthermore, he has named himself 4 times the champions league title winner. In which, one came out from Manchester United and the rest 3 of them from Real Madrid.

Back in 2016, he led his team to the victory in the European championship as a captain. In his whole international career, the Euro-Cup trophy becomes his first-ever international trophy for Portugal.

Cristiano Ronaldo is playing for his country as a striker. The Euro cup matches will take place in different countries which are listed below:

According to Forbes, Ronaldo’s net income throughout the year 2017 will climb up to $93 million which makes him the fifth-highest-paid celebrity in 2017. Moreover, his net worth keeps increasing from his annual salary of $45 million.

He also ranks in a pretty huge allowance from endorsements of Nike, Sacoor Brothers suits, Monster headphones and Tag Heuer watches. As per the reports of Forbes, he topped the list of the world’s highest-paid athletes in 2016 and 2017. In addition, as of July 2017, his net worth reached $400 million.

Lionel Messi Vs. Cristiano Ronaldo! Who is your favorite football player?

Cristiano Junior’s mysterious mother is still unknown to the whole world. Ronaldo’s clear image in the sports world went wrong when he was revealed to drink widely in a nightclub in July 2008.

The whole world and his supporters got shocked when he was arrested on suspicion of raping a woman in October 2005.

Apart from that, the donation of $8 million to the earthquake victims in Nepal was just a rumor. Moreover, his statement on the relationship between Messi, Suarez, and Neymar shook the whole Catalan media and their fans. There was also a rumor that he is leaving football club Real Madrid soon.

Ronaldo has an athletic body which also defines his hard work and dedication. Cristiano has a height of 6 feet 1/4 inches and a weight of 83 kg. He has dark brown hair and light brown eyes.