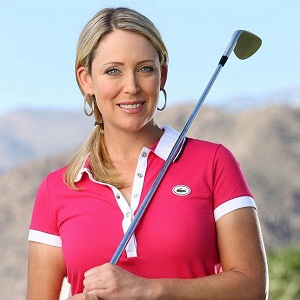 I think LPGA players for a long time were afraid to say what's on their minds. But we're doing all the right things and there's nothing wrong with having some great personalities and rivalries and some friction. I think that's really good for the sport

I did everything I could do and tried as hard as I could. In light of how I putted, I guess second place will do.

In 2006, Kerr married businessman Erik Stevens. Kerr and Stevens maintain a residence in Scottsdale, Arizona. On December 8, 2013, Kerr and Stevens welcomed their first child, a son named Mason, via a surrogate. The couples are enjoying their family life with their son.

Who is Cristie Kerr?

Cristie Kerr is an American professional golfer who plays on the LPGA Tour. She has 18 wins on the LPGA Tour, including two major championships. Kerr was the number one-ranked golfer in the Women’s World Golf Rankings for three time periods in 2010. She is naturally left-handed but plays golf right-handed.

Kerr was born on October 12, 1977, in Miami, Florida. Her nationality is American and ethnicity is North American.

She started playing golf at the age of eight and had a successful amateur career, winning the 1994 Junior Orange Bowl International Golf Championship and the 1995 Women’s Western Amateur. Kerr was the 1995 American Junior Golf Association Junior Player of the Year.

Kerr had begun her career early from her early school days. In 1996 she played in the Curtis Cup and was the low amateur at the U.S. Women’s Open. Her first win in a professional tournament came in April 1995 in the Ironwood FUTURES Classic on the Futures Tour, which she played while still an amateur.

She turned professional in 1996 at age 18 after graduating from high school, playing on both the Futures Tour and Players West Tour. Her LPGA career started fairly slowly; she broke into the top fifty on the money list in her third season in 1999 but did not win until her sixth season. In 2002 she won her first LPGA event at the Longs Drugs Challenge.

In 2010, Kerr won two of the first 10 tournaments on the LPGA Tour, including the LPGA Championship. As a result of this finish, she went to the top of the Women’s World Golf Rankings on June 28, 2010. Kerr held the position for three weeks before Ai Miyazato again regained the top ranking. In 2015, she won the CME Group Tour Championship.

Kerr made an appearance on an episode of the third season of Donald Trump’s television series The Apprentice in 2005.

Cristie Kerr: Salary and Net Worth

She has a net worth of $15 million but her salary is not revealed yet.

Kerr has not been dragged into any kind of significant rumors and controversies yet. She, thus, has managed to keep her public image clean.

Cristie Kerr has a height of 5 feet 3 inches. Her body weighs 63kg. She has blonde hair and blue eyes. Furthermore, her body measurements are 36-26-36 inches. Her dress size is 8 US and her bra size is 34B.