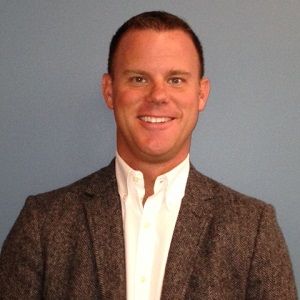 Crowley Sullivan is happily married to Kit Hoover, an American television personality. Also, the couple is blessed with two daughters, Hayes and Campbell and one son, Klark.

So far, there are not any rumors relating his affairs. However, we can only wait and see if he decides to share his relationship with us.

Who is Crowley Sullivan?

Crowley Sullivan is an Emmy Award-winning American television producer. He is mostly known as the executive producer for the programs such as Pardon The Interruption, Around The Horn and Playmaker. Currently, Crowley is the general manager of sport for MANDT VR, an immersive entertainment and media studio.

As regards Crowley’s academic qualifications, he graduated from the Michigan State University with Bachelor of Arts Degree in 1993.

After serving for Brokerage Firm, he started his career in the production business as the production assistant for Lucky Duck Production Company. In addition, he worked there until 1997.

Until then he was not very famous and known to the public. As he started to work for ESPN, he gained lots of success in his career. He worked as an associate producer for this channel. Furthermore, he was the executive producer of the programs including Pardon The Interruption, Around The Horn and Playmakers.

As the result of his great determination towards his work, he is able to receive various awards including, Emmy Awards(2003,2004,2005) and Peabody Awards.

Crowley Sullivan: Salary and Net Worth

As regards Crowley’s salary and net worth, we are unknown to this information so far.

In reference to his media appearance, he is tall gentlemen with fair skin and brown hair. However, many of the trusted domains are unknown to the details regarding Crowley’s body measurement until now.