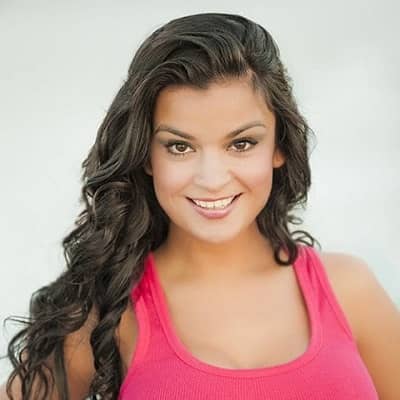 As i look back on my life, i realize that every time i thought was being rejected from something good, i was actually being re-directed to something better.

Crystle Lightning is married to her husband Henry Andrade aka MC RedCloud. But their marriage details are not disclosed.

The couple also have a son together on May 29, 2019. They have named their son Kisik Lightning-Cloud and he also has his Instagram account. It is handled by Crystle and henry.

Who is Crystle Lightning?

Crystle Lightning is an artist, musician, film actress. DJ, and hip-hop MC. She is also popular for pairing along with MC RedCloud and forming the hip-hop group LightningCloud.

Crystle was born on February 5, 1981, in Edmonton, Alberta, Canada. She holds the United States and Canada nationality.

Her mother Georgina Lightning is a director and actress. Likely her father’s name is not known. Her family moved to Hollywood, California, when she was 9 yrs old.

Crystle has a brother Cody Lightning who is an actor. She started performing in Edmonton, Alberta, when she was just 4 years old.

She has been also trained in horseback riding, modeling, piano, singing, dance, and weapons.

The actress began acting in the year 1994. She has then appeared in various several films like  Three Ninjas Knuckle Up(1995).

She has then performed various roles in on the daytime NBC soap Days of Our Lives; and movies like BET’s The Game (2006); American Pie Presents Band Camp (2005); and in Older Than America (2008). Recently, she earned a nomination for Best Actress in a Drama Series for Trickster at the 9th Canadian Screen Awards 2021.

Lightning is also an electro house DJ. Cyystle partnered with Christi Mills. They have regularly performed regularly at various Los Angeles and US venues.

Crystle is a DJ booth as well as the center-stage mic. She paired up with MC RedCloud and form the hip-hop group LightningCloud. They  released their self-titled debut, LightningCloud, in 2012

The Aboriginal Peoples Choice Music Awards (APCMA) has even honored the group with recognition for Best Hip Hop Album in November 2012.
LightningCloud won the “Who’s Next: Battle for the Best” contest in 2013.

Being the winners they received a cash prize, furthermore, the honor of representing west coast hip hop. It was against Hot 97’s Brooklyn-based east coast representative, Radamiz. The battle was held in Austin, Texas, on March 15, 2013. LightningClond won that MC battle and also received the opportunity to work with Timbaland in the recording studio.

She is one of the successful hip-hop artists having a net worth of around $1 million.

A normal DJ can earn around $13.07 per hour in the United States. And Crstyle working as DJ as well as establishing her own music career must have earned a good amount.

Furthermore, she also earns from different items she sold from her website.

Crystle doesn’t prefer to be involved in any such activities that can cause a buzz in the media. Likely, she hasn’t faced any such rumors also.

Crystle has an average height of 5 feet and 2 inches (1.57 m). Likewise, she has beautiful dark brown eyes with black hair.

Similarly, she launched her YouTube channel on Jul 28, 2009, and has over 2K subscribers now.