Updated On December 18, 2022 | Published By: Aastha Kirlov
Share this
Married 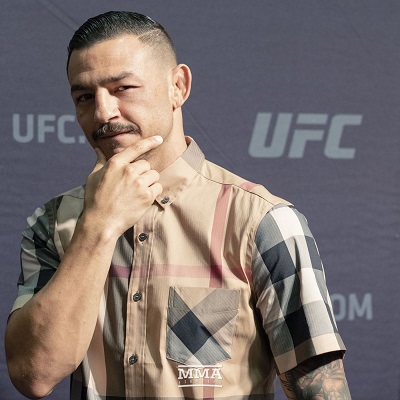 "As a native of Southern California. I look forward to bringing this community, which is both near and dear to my heart, a myriad of amazing amenities and programs to help them TRAIN different and live a healthier lifestyle.''

"I knew he (Choi) deserved the hype. but he made a mistake calling me out. I wanted to prove to everyone that I've still got it. Don't write me off again." "All I know is that, in my mind, I finish Frankie Edgar, that I'm getting that title shot. That's all that's on my mind.".

Who is the wife of Cub Swanson?

Kenda is an American model and host for UFC and Fox Sports. The couple was married on June 1, 2018, and together they have three children.

In his spare time, Swanson loves playing golf near his hometown in Indio, California.

He currently resides in California with his wife and family.

Who is Cub Swanson?

Cub Swanson, known as the killer, is an American mixed martial artist. Swanson competes in the Lightweight and Featherweight division.

Cub is a black belt in Brazillian Jui-Jitsu. He won the 2016 Fight of the Year against rival Choi-Doo ho. Cub was also ranked the #10 Featherweight in the world by Sherdog and ranked #5 within the UFC in 2013.

He currently competes as a featherweight in the Ultimate Fighting Championship.

Cub Swanson was born Kevin Luke “Cub” Swanson on November 2, 1983, in California, United States to a Swedish- an American father and a Mexican mother.

His father died of melanoma after three months after his birth. After his mother got into drug addiction, his father’s cousin adopted him and his siblings.

He has four other siblings: two older brothers Steve and Aaron, and two sisters of which one has Down Syndrome. One of his brothers, Steve works with him at MMA.

Swanson went to Cathedral City High School. But he associated himself with street gangs and indulged in fights. As a  teenager, he was sent to a juvenile detention center for a house robbery. He was released at the age of 17.

At the age of 19, he worked with United Cerebral Palsy where he helped socially disabled children.

WEC scheduled Swanson to fight Diego Nunes on April 5, 2009, at WEC 40. Nunes withdrew from the fight due to a hand injury. On June 7, 2009, at WEC 41, he faced Jose Aldo but was defeated 8 seconds into the first round via a double flying knee.

Swanson defeated John Franchi via submission on November 18 at WEC44 where he broke both hands. The fight earned Swanson his second Fight of the Night honor.

On November 11, 2010, Swanson won the fight against Mackens Semerzier at WEC 52. The bout was an exciting back-and-forth affair that earned both fighters Fight of the Night honors.

On October 28, 2011, WEC merged with the Ultimate Fighting Championship and most of the WEC fighters were sent to UFC. On Nov 12, 2011, at UFC on Fox 1, he lost the fight via submission in the second round against Ricardo Lamas.

In his second fight, on January 28, 2012, at UFC on Fox: Evans vs. Davis, he faced George Roop and won the fight via TKO in the second round.

In March 2013, Swanson was ranked the #10 Featherweight in the world by Sherdog and ranked #5 within the UFC.

On April 22, 2017, at UFC Fight Night 108, Cub Swanson defeated Artem Lobov via unanimous decision but went on to lose against Brian Ortega in December.

Swanson faced Frankie Edger and Renato Moicano in 2018 but lost both fights.

On May 4, 2019, he was defeated by Shane Burgos at UFC Fight Night: Iaquinta vs. Cowboy but won the fight with Kron Gracie on October 12, 2019, at UFC on ESPN+ 19 via unanimous decision. This win earned him the Fight of the Night bonus award.

He has dark hair and dark eyes.

You may also know about the net worth, body measurements, and early life of Ryan Hall, Darren Elkins, and Mickey Gall.