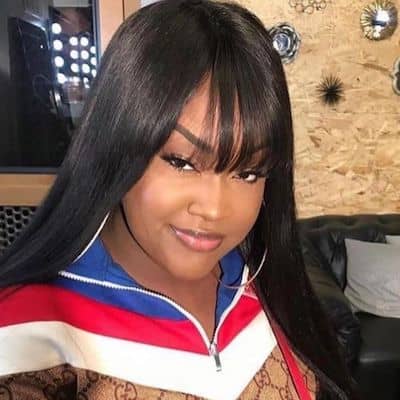 Cupcakke at present is a bisexual woman and is possibly single. She has not provided the details of her affair or partner to the media yet.

However, listening to some of her songs, they indicate that she suffered from bad breakups in the past.

Cupcakke is an American rapper, singer, and songwriter. She is known for her unique music style where she uses hyper-sexualized lyrics, brazen, and LGBT and female empowerment themes.

This musical artist is associated with Hip-hop and dirty rap genres. She has also teamed up with artists like Gumball Machine, Nico Raimont, Keiston, and more.

She was born on 31 May 1997 in Chicago, Illinois, the United States with a real name is Elizabeth Eden Harris. The name of her father and her mother’s name is not revealed.

But her mom used to work as a telemarketer and she raised her alone.

Cupcakke’s ancestry is All-American and talking about her academics, she went to Dulles Elementary School.

Cupcakke entered the entertainment industry in 2012  but from an early age, she used to sing in the church. Her first studio album titled Audacious was released in Oct 2016.

Then in 2017, she came up with a second album and named it Queen Elizabitch. Her third and fourth musical projects are Ephorize (2018) and Eden (2018).

At present, her estimated net worth is around $500k US. Also, her salary from her career is not calculated.

This musical artist is keeping herself away from rumors plus scandals at present. But due to her song’s lyrics, she attracts lots of audiences.

Regarding Cupcakke’s body features, her height is 5 ft 3 inches and her body weight is 66 kg. She has dark brown eyes and her long hair has natural black color.

She experiments her looks by dying her hair in colors such as Blonde, Pink, Purple, Blonde, and Ombre.

Her voluptuous body figure and her shoe size are unknown.

Cupcakke is officially active on social networking sites. She has more than 603k followers on Twitter and over 32k on Facebook.

Plus, she is also followed by more than 617k people on Instagram and her YouTube channel has above 639k subscribers.