Model-Actor Curran Walters is low-key about his romantic affair.

There is no information regarding his love life. He is tight-lipped when it comes to talking about his personal details. He is possibly single for now. Currently, he is serious about his career and working hard on it.

Furthermore, he has not dated anyone until now. He hardly shares information about his personal life. So, we can assume that he is not married neither he is in a relationship. 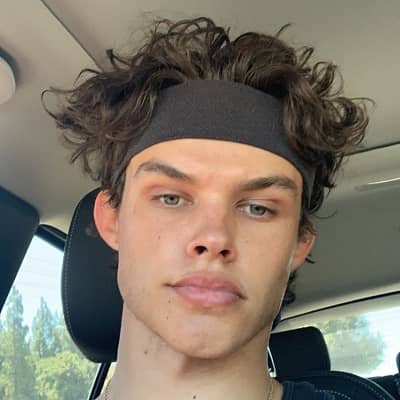 Who is Curran Walters?

Curran Walters is an American actor and former model. He is popular for his role of Jason Todd/Robin in the HBO Max superhero series, Titans. Currently, he is active in Entertainment Industry.

In addition, he has appeared in several movies including Speechless, Game of Silence, Too Close to Home, Girl Meets World, 20th Century Women, and Alexa & Katie.

Likewise, he hasn’t revealed the name of his parents. However, he posted a sensitive post in 2018 referring to his father who passed away. This shows that his father passed away when he was young. He grew up along with his younger sister Harlowe Walters.

Curran is originally from the USA and spent his childhood in his hometown. His birth sign is Capricorn. He holds American nationality. Regarding his education, he graduated from Oak Park High School situated in Oak Park.

Curran Walters is mainly a professional Actor. He has made his appearances in various movies and Tv series. He has been active in his acting career since 2014 till the present.

In 2014, Walters made his Television debut in the Comedy film, Growing Up and Down which was written by Steve Leff. In the movie, he portrayed the role of ‘Chad’. After that, he appeared in a recurring role as “Young Jackson” in the series ‘Game of Silence’ in 2016. In 2016, he made his appearance on various Television series including Girl Meets World, Speechless, and Too close to home.

Walter appeared in the comedy-drama ’20th Century Women’ in 2016, written and directed by Mike Mills. After 2 years, Walters made his third-time movie appearance in the science fiction film ‘Playing Dead’ in 2018 starring  Leah Lewis, Luke Youngblood, and Tyler Ritter.

He got his first major role as Jason Todd, the second Robbin in the fifth episode of Titans. He was a swap for Dick Grayson after he abandoned Gotham. In 2019, he was cast as a series regular in its second season. In December 2019, he made his appearance in the CW’s superhero television series ‘Supergirl’ for the Crisis on Infinite Earth’s crossover event.

Furthermore, he starred in the horror, thriller film ‘Do Not Reply’ in 2020 as ‘Dylan’. Until Now, Curran has made his appearance in various TV series that include ‘Best.Worst.Weekend.Ever.’, ‘Fam’, ‘Legends of Tomorrow’, and ‘Alexa & Katie.’

Apart from movies, he is also a model. He has done modeling for fashion brands such as Brothers, Lee Jeans, and Tilly’s. He has appeared in commercials for Samsung Galaxy and the games computer game NBA 2K15. Moreover, he has endorsed or promoted various brands through social media accounts.

Speaking on his income, She makes a decent sum of money through his appearance in Movies. He has an estimated net worth of $2.5M.

He is one of the successful people of America who gained huge fame and wealth from his Movie Career. Similarly, He has endorsed or promoted various brands through social media accounts.

Likewise, he is living a lavish life in Los Angeles. His Salary and assets value are under review.

Curran has been successful in keeping herself far from rumors and scandals in her personal and professional life. Likewise, Walters fully focuses on her career.

Curran stands to a height of 5 feet 8 inches. Similarly, he has a charming personality with an average weight of 70 kg. He is praised for his athletic body build and slightly curly hair. His hair color is dark brown and his eyes are green. However, there is no more information regarding his body stats, dress size, and shoe size.

In addition, he is popular on Tiktok with username ‘thecurdog’. He has accumulated 135.9K followers and 1.7M total likes on his Tiktok account.

Click on the link below for Chelsea Zhang, Donald Faison, and Ursula Andress !! Check those links for more details.