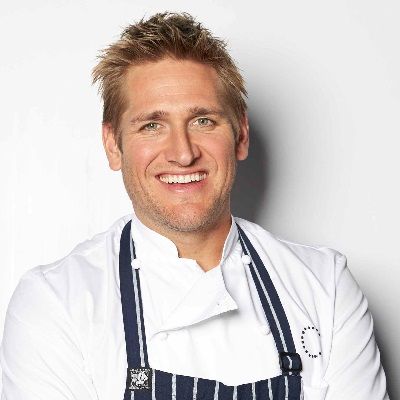 Ever since I was young I've always been fascinated with food - whether it was making marmalade with my Nan and Grandad or fudge with my Granny. I've always realized it was food that brought my family and friends closer together. I often hear people say that they don't have the time to cook. Well, actually, a good home cooked meal can take less time than waiting for a take-in pizza! And be a lot more fun. It's one of life's great pleasures.

Curtis Stone is a married man. He married his girlfriend, Lindsay Price. The wedding took place on the 8th of June 2013.

The couple tied the knot at the Hilton Sa Torre Mallorca Resort in Spain attended by the guests like Tiffani Thiessen and Brady Smith.

The lovebirds started dating each other back in late 2009. After dating for more than three years, they eventually got engaged in July 2012.

Who is Curtis Stone?

Australian Curtis Stone is a 3 star Michelin chef and TV Personality. He is renowned for his signature dishes like Scallop Crudo.

Stone is popular among the cooking shows like MasterChef Australia, and Top Chef Jr.

He is also the owner of the restaurant’s chains like Maude.

Curtis Stone was born on the 4th of November 1975 in Melbourne, Australia.

His father, Bryan Stone is an accountant by profession whereas his mother, Lorraine Stone is a florist. His parents got separated from each other via a divorce in 1977.

He has a brother, Luke Stone. They are of Jewish-British ethnicity.

Talking about childhood, he grew up in the cooking environment with his paternal grandmother, Maude. She was the one who taught him to cook when he was four years. When he was five, Maude taught the recipe of sugary fudge.

With each passing recipe, he developed a passion for cooking. However, he chose to pursue business as his career as studied a Business at Victoria University in Melbourne. Despite that, his fate drove him to be a Chef and joined the Box Hill Institute got qualified as a chef.

At the age of 18, Curtis Stone started his career as a chef at the Savoy Hotel. After that, he worked in various hotels as a chef. However, when he was qualified as a chef, he joined Marco Pierre White. In a short span of time, he became the head chef of White’s Quo Vadis.

Apart from being a chef, he is famous for his own restaurant chain. On the 1st of February 2014, he opened his first eatery outlet, Maude named after his grandmother. The restaurant is listed as one of the best restaurants in the world. Two years later, he established his second restaurant in California, Gwen.

In 2004, he first appeared in the cooking show, Surfing the Menu as a presenter. Later, he featured the show, My Restaurant Rules as a Host.

Moving forwards, he featured in the shows like The Biggest Loser, Top Chef Masters, and All-Star Academy. Last, he appeared in the series, Celebrity Watch Party.

Through his career as a chef, he has an estimated net worth of $16 million. As a chef, his earnings are in the range of $26k to $62k. As a TV personality, his salary per episode is $20k.

Besides that, she also makes as a cookery author too through his sales and royalties. Apart from that, a significant portion of his net worth is attributed to his restaurants’ chains.

As of now, he has stayed far away from any sort of controversy that created a buzz in the media. Similarly, there are no rumors linked to him.

Curtis Stone has blue eyes with auburn hair. His height is 6 feet 3 inches and weighs around 86 kg.