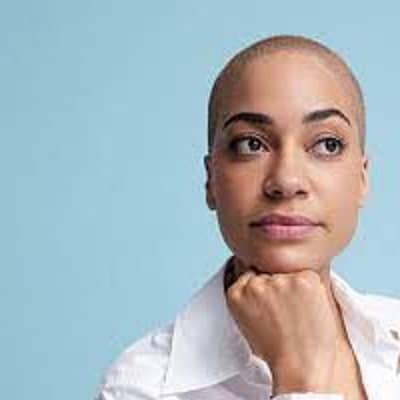 She is married to Sean Griffin. They both had been dating for a long time and decided to take a vow on 27th December 2014. At their wedding, the bride wore a woolen coat over her wedding dress and flowers in her hand whereas the groom was in a grey suit. After some years they welcomed their first son Maximillian in this world in 2018.

Who is Cush Jumbo?

Cush was born on September 23, 1985, in Denmark Hill, London, England, at King’s College Hospital. Angela (née Hall) is her mother’s name, and Marx Jumbo is her father’s. Her mother is British and her father is Nigerian, hence she is of mixed race.

She was the second of six children to be born. The names of her siblings have not been released. She has always enjoyed dancing and began learning ballet, modern, and other styles as a toddler.

She has attended Adamsrill Primary School in Sydenham. At the age of 3, she has started learning dance like tap, ballet, and modern and also learned street dance, contemporary and ballroom, and Latin in later years. She was trained at the Francis Cooper school of dance at the age of 11 to 15 and whilst attending Cator Park School for girls. But later at 14 she left Cator school and started to follow acting seriously at the BRIT school in Croydon. Before starting her career, she had graduated from BA (Hons) Acting course at the central school of speech and drama. She also undertook teacher training before she started her career professionally.

Cush has also worked in the Royal Exchange Theatre in Manchester with shows of The Cherry Orchard, The Crucible, the Caucasian Chalk Circle, Richard III, and Pygmalion, for which she acquired MEN and Ian Charleson Award nominations.

She has also done projects on televisions series like My Family, Harley Street, Casualty, Deadwater Fell, Trying, and many more.

Recently she has worked on The Beast Must Die and Stay Close.

She is a well-known actress whose source of income is her career s an actress. Her net worth is to be around between $1 million to $5million.

Cush Jumbo argues that the UK is losing talented actors because it is unwilling to accept diversity.

She claims that by failing to hire black performers, they end up working in the United States.

Claims that British black actors are taking over jobs previously held by Americans due to skill.

Jumbo, 31, claims she frequently hits the ‘exotic best friend ceiling’ while auditioning in the UK.

Jumbo is 5 feet and 7 inches tall and 112lbs weighs. She has maintained her body and has a curvy figure, her body measurements are 24 inches’ waist size, 33 inches’ hips size, and 29 inches bust size. She has black color eyes and short beautiful dark brown hair.

She is active on social media has posted many photos with his child sharing lovely moments with him. She has 56.2 k followers with 727 posts on Instagram but she has no accounts like Twitter and Facebook under her name.