Dababy is an American rapper and songwriter and has released albums Baby on Baby and Kirk. He is in currently single. 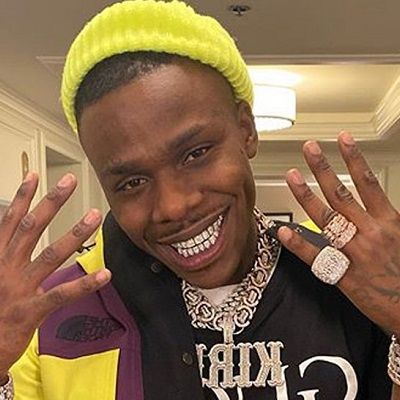 Previously, he was in a relationship with a rapper DaniLeigh.

Again in Feb 2021, Danileigh announced on her Instagram that she broke up with him.

Their affair came to the news in Aug 2020, but they were separated in Sep 2020. But recently they reunited.

He was in a relationship with a pro hairstylist named MeMe and has a daughter with her. MeMe from her previous relation has a son.

Rumors are that DaBaby is expecting his second child from MeMe. Moreover, he also has a son from his previous affair.

DaBaby aka Baby Jesus is an American rapper and songwriter. He has released albums like Baby on Baby and Kirk. He is mainly related to hip hop genres.

He was born Jonathan Lyndale Kirk on Dec 22, 1991. His birthplace is Cleveland, Ohio, the U.S. He holds All-American ethnicity.

His father passed away in 2019. He studied at Zebulon B. Vance High School, Charlotte, North Carolina. From there, he completed his graduation in 2010.

DaBaby’s first mixtape released was Nonfiction. Then in March 2019, he released his first album Baby on Baby. This album has songs like Taking It Out, Deal Wit It, Suge, Carpet Burn, Baby Sitter, Walker Texas Ranger, Backend, Best Friend, etc.

The listeners loved his songs which led this album at no. 7 on Billboard 200. This success resulted in the release of his second album named Kirk.

It was released in Sep 2019 and has songs such as Pop Star, Prolly Heard, Raw Shit, Intro, Off the Rip, There He Go, and Gospel.

He has a YouTube channel that has more than 2.89M subscribers and was created in Jan 2015.

This rapper was involved in the death of a 19-year old boy, Craig on Nov 5, 2018. This incident happened in Walmart at Bryton Town Center, Huntersville, North Carolina. The boy who was robbing was shot in the abdomen by DaBaby.

DaBaby said that his action was in self-defense. Then in March 2019, the allegation was dropped off but DaBaby was found guilty of carrying a concealed weapon and was sentenced to a year of probation.

However, in Jan 2020 this rapper was again arrested for battery charges.

This talented musician has an estimated net worth of $3 million. From his youtube channel, his estimated yearly earnings are between $383.7K – $6.1M US.

DaBaby has black eyes and black hair. His height is 5 ft and 8 inches with a weight of 72 kg.