Dakota Johnson is an American actress and model. She is currently in a relationship.

Dakota Johnson is in a relationship. She is having an affair with Chris Martin. He is a lead singer of the band, Coldplay. Recently, in December 2017 they were seen holidaying in Israel.

She was previously in relationships with musician Noah Gersh and actor Jordan Masterson. Since 2014 she has been in an on/off relationship with model Matthew Hitt. 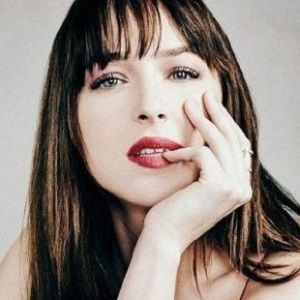 I think about my dwindling anonymity, and that's really scary because a very large part of me would be perfectly happy living on a ranch in Colorado and having babies and chickens and horses - which I will do anyway

I want my outfit to match my mood

Los Angeles is a really strange place. I grew up there like a normal kid, but it was not until I experienced other parts of the world that I realized how really and truly bizarre to the core it is - inside the homes of the powerful and damaged.

Who is Dakota Johnson?

Dakota Johnson is an American actress and model. She is famous for her role as Anastasia Steele in the movie Fifty Shades of Grey(2015) and the sequel Fifty Shades Darker(2017).

She debuted in a movie in 1999 sharing screen with her mother in a comedy-drama named Crazy in Alabama. In 2006, she became Miss Golden Globe.

Dakota Johnson is selected as Madame Web in the Sony Universe of Marvel studio’s next standalone superhero movie.

Dakota Johnson was born on October 4, 1989, in Austin, Texas. Her nationality is American and her ethnicity is mixed(English, Welsh, German, Norwegian, Scots-Irish, Irish, Scottish, and distant Dutch and French Huguenot).

Antonio Banderas, who is an actor was her former stepfather. She has six half-siblings – four on her father’s side and two on her mother’s side.

Dancing was her interest since her childhood.

She went to Aspen Community School in Aspen, Colorado. Later she joined Santa Catalina School for her high schooling which was located in Monterey, California.

She did a photoshoot with children of other celebrities for Teen Vogue at age 12 and after that, she showed her interest in modeling.

During the very time, her interest was also in dancing and her official debut in film was during the year 1999 in the film named Crazy in Alabama. This time she and her half-sister played the character as the lovely daughters of their real mother.

In 2006, she was chosen as Miss Golden Globe 2006, where she served as the first second-generation Miss Golden Globe in the Globes’ history. After graduating from high school, Johnson came back to pursue her acting career.

She also acted in Beastly, Chloe, and Theo by Ezna Sands and For Ellen by So Yong Kim In 2012, she had roles in Christopher Neil’s film Goats, with David Duchovny; Nicholas Stoller’s film The Five-Year Engagement for producer Judd Apatow, and the film 21 Jump Street.

She also played the female lead in Chris Nelson’s film Date and Switch written by Alan Yang. In 2012, Johnson played the role of Kate in the comedy series Ben and Kate on Fox, which was her TV debut. In 2013, she had roles as one o the new hires on the “Finale” episode of The Office. Johnson returned to her films quickly and acted in Need of Speed (2014).

She was also cast in Cymbeline, a modern version of William Shakespeare’s work. Johnson played Anastasia “Ana” Steele in Fifty Shades of Grey, which was released in February 2015. He won the role over Lucy Hale, Felicity Jones, Elizabeth Olsen, Danielle Olsen, Danielle Panabaker, and Shailene Woodley.

In 2015,  He starred in Luca Guadagnino’s thriller A Bigger Splash, opposite Tilda Swinton, Matthias Schoenaerts, and Ralph Fiennes. She also played a lead in the 2016 comedy How to Be Single, with Leslie Mann and her Date and Switch costar Nicholas Braun.

In 2006, Johnson signed with IMG Models.  Though the acting is her primary work, she has since modeled for MANGO brand’s jeans line in 2009 and shot the “Rising Star” campaign for the Australian fashion label Wish in 2011.

Dakota Johnson: Salary and Net Worth

The feud between Ellen Degeneres and Dakota has attracted lots of media. Ellen was not invited to Dakota’s birthday which offended her.


Dakota Johnson has a good height of 5 feet 7 inches with a body weight of 54kg. She has brown hair color and her eye color is blue. She has a well-shaped body of 34-24-34 inches.