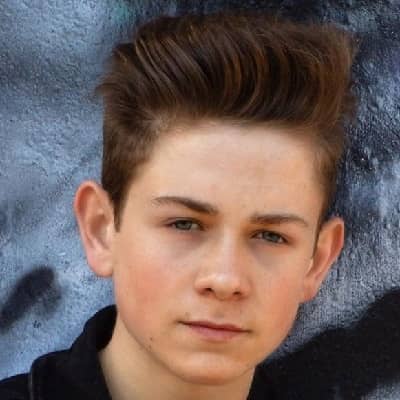 Dakota Lotus is too young to be in a romantic relationship. As of now, he hasn’t introduced anyone as his girlfriend or lover so, he is possibly single.

Presently, he is more focused on his career rather than any love affairs. In further days, if he revealed anything about his love life then we will update it.

Who is Dakota Lotus?

Dakota Lotus is a well-known American child actor who is also a singer, musician, and dancer. He rose to fame after appearing in the prominent title role Cooper Wrather in the series called Coop and Cami Ask the World.

The child actor was born on December 16, 2004, in California, United States. At present, he is 16 years old and his Zodiac sign is Sagittarius. He holds American citizenship and belongs to Caucasian ethnicity.

His mother’s name is Autumn Lotus who is an artist and choreographer. However, he hasn’t yet revealed his father’s details to the public. Also, it seems he is the only child of his parents.

Moving towards his academics, he hasn’t yet disclosed his educational details. He might be in high school. Since he was a child, he has been interested in acting and musician. Also, he was taught musical theatre by actress Janet Adderley for eight years.

Dakota began his career in the year 2018 and that year he has been featured in the Tv documentary ‘Disney Parks Presents a 25 Days of Christmas Holiday Party.’ In the same year, he starred in the comedy television series called ‘Coop & Cami Ask the World.’

He played the title characters as Coop along with Ruby Rose Turner in the series. Besides them, the series features the personalities like Olivia Sanabia, Albert Tsai, Paxton Booth, Gabriella Graves, and other casts.

To date, Dakota has not been part of any sorts of rumors and scandals regarding his personal and professional life. Also, he stays away from such controversial acts that could hamper his uprising career.

As of other online sources, he has an estimated net worth of around $80 thousand to $100 thousand throughout his profession as an actor. However, his other income, salary, and yearly income are still under review.

The actor is 5 feet 5 inches tall and his weight is around 50 kg. He has dark brown hair color and has a beautiful blue pair of eyes color. Further, there are no details available regarding his other body measurement.

Furthermore, he has a self-titled Youtube channel where he has amassed nearly 9.72k subscribers. On his Youtube channel, he mostly uploads his singing videos. He has also a Tiktok account with more than 228k followers.