Previously, he was engaged to Clare Crawley. The couple first met each other during the 16th season of The Bachelorette. In the show, Clare featured the show as the Bachelorette, and Dale was a contestant of the show among the 42 potential contestants.

However, Dale’s journey ended in the middle of the show. Following him, Clare also left the show. That step made history on the show Clare is the only one to quit the show after the love. They got engaged to each other. The couple made the news official with his Instagram post where Dale proposed to her with his knee down. 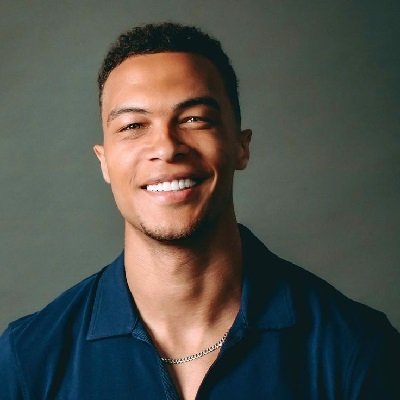 Who is Dale Moss?

Dale Moss is a former American Football player and reality TV Personality. Moss is renowned as the contestant of the TV series, The Bachelorette.

Also, Dale Moss happens to a global ambassador of the Special Olympics.

Dale Moss was born on 24th September 1988 in Brandon, South Dakota to Delores and Dale Sr. He is of British-Welsh ethnicity.

His parents are an interracial couple. His mom, Delores passed away when he was too young. He grew along with the four sisters; Amber, Jessica, Robyn, and Candace.

Moving toward his academics, he completed his High School education at the Brandon Valley High School. When he was in High School, he developed his habit as an athlete as he used to play basketball, football, and track.

Later, he graduated from South Dakota State University with a major in consumer affairs and business economics. At the time, he used to play basketball for four years. Also, he played for the football team for a single season.

Within two years, he signed Chicago Bears as a practice squad. Later, he signed a futures contract with the team. However, the team gave up on him on 10th June 2013. Nine days later, he signed Carolina Panther. Also, he waived the team on 24th August 2013.

In January 2014, he joined the Los Angeles Kiss of the Arena Football League. On 23rd April 2014, he got placed on recallable reassignment. On 29th July 2014, he once again signed with the Chicago Bears. Eventually, he was waived at the final roster cuts in August 2014.

Ever since he stayed out of the limelight and started pursuing his career in the modeling sector.

However, he once again made the headlines when he made his appearance in ABC’s reality show, The Bachelorette. Also, he received the first impression rose during the very first episode. However, his journey on the show ended in the middle of the show.

Apart from that, his earnings as a global ambassador range from $21k to $53k.

He has hazel eyes with black hair. He stands at a height of 6 feet and 3 inches and weighs around 97 kg. He wears shoes of size 7 (US).

To date, he has managed to maintain distance from any sort of controversy and scandals that created a buzz in the media. Besides that, he has not been part of any kind of rumors.