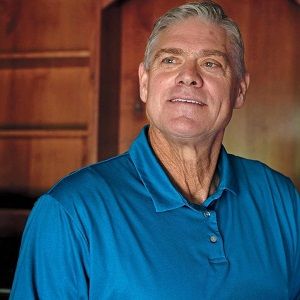 He is a married man. He is married to Nancy Thomas. There is no information about how they met. They married on 27th October 1979. Similarly, he has eight children. they are Chad, Travis, Shawn, Tyson, Taylor, Jake, McKay, and Madison.

There is no information about the divorce of this couple. He might be living happily together with his family.

Who is Dale Murphy?

Dale Murphy is an American former professional baseball player who played as an outfielder, catcher, and first baseman for the Atlanta Braves, Philadelphia Phillies, and Colorado Rockies. he is the winner of the Gold Glove Award for five consecutive years from 1982-1986.

He was born on 12th March 1956 in Portland, Oregon. He is the son of Charles Murphy and Betty Murphy. Similarly, he has a sister Sue Murphy. Likewise, he holds American nationality and his ethnicity is unknown.

Talking about his education, he attended Woodrow Wilson High School.

In the year 1976, he began his major league career with a nineteen-game stint catching with the Atlanta Braves. Similarly, he appeared in only eighteen games the following season. In the year 1978, he played first base mostly; at the plate, he had a .226 batting average, though he also showed hints of his future power by hitting 23 home runs.

Likewise, he played well but the eventual World Series-champion St. Louis Cardinals eliminated his team the Braves in the 1982 National League Championship Series. In the year 1988, despite being voted to what would be his final All-Star appearance, his production began an inexorable slide downward. He saw his batting average free-fall from .295 in 1987 to .226 in the year 1988.

From 1997 to 2000, he served as president of the LDS Church’s Massachusetts Boston Mission. In the year 2005, he started a non-profit organization called the iWontCheat Foundation to promote ethical behavior and deter steroid use and cheating in youth athletics.

In the year 2008, he was appointed to the National Advisory Board for the national children’s charity, Operation Kids. Further, in 2017 he opened a restaurant, Murph’s, in Atlanta near SunTrust Park, where the Braves have played since the 2017 season.

Likewise, he won the Roberto Clemente Award in 1988.

He has the estimated net worth of $15 million. Similarly, he earned his wealth from 18 years of playing in the Major League Baseball(MLB) with three different teams. He has a house in Alpine, Utah(UT), USA. He might have earned a huge amount of money but he has not revealed his salary and earnings.

There is no any big rumors and controversy of Dale. He is successful in maintaining his life away from rumors.

Dale Murphy has a height of 6 feet 5 inches and his weight is unknown. Similarly, his hair color is salt and pepper and he has blue color eyes.