Damaris Phillips is a celebrity chef and host of Southern & Hungry with Rutledge Wood and The Bobby and Damaris Show with Bobby Flay. 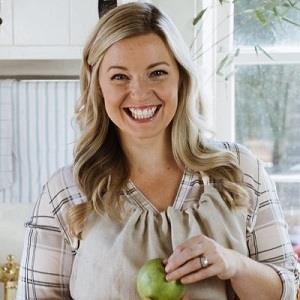 I was so excited to marry Darrick, I would have gone to the courthouse, but this was more fun — and a lot prettier.

Damaris Phillips is married to Darrick Wood on June 13th, 2015.

Darrick is an education consultant. The wedding ceremony took place at Willow Park in Louisville, Kentucky, and was attended by 235 guests.

The celebration also included an outdoor lounge complete with living room couches and tables, picnic blankets all set for the cocktail hour. She does not have children from any of her relationships.

Information relating to Phillips’ any other relationships prior to her marriage is not known at present.

Who is Damaris Phillips?

Damaris Phillips is an American chef and television personality. She won the ninth season of the Food Network television series ‘Food Network Star’ in 2013.

Additionally, she hosted the Food Network show ‘Southern at Heart’ for five seasons from 2013-16.

Phillips was born in Lexington, Kentucky on December 8, 1980, as Damaris Lennon Phillips to parents Maurice Phillips Jr.(father) and Mary Phillips(mother).

Throughout her childhood years, she grew up with her four brothers. One of her brothers’ name is Dylan Phillips and her sister’s name is Morgan Phillips.

Cooking became Phillips’s special hobby since her early life. She is of American nationality and her ethnic background is Caucasian.

Talking about her education, Phillips attended Jefferson Community and Technical College. Later, she graduated from there with a degree in Culinary Arts. Additionally, she has stated that she decided to attend culinary school.

Phillips became a contestant on the ninth season of the Food Network series ‘Food Network Star’ in early 2013. In the show, she landed in the top three and eventually became one of the final three contestants, and she filmed a pilot for a potential series called ‘Eat, Date, Love’. She became the winner of the competition on August 11, 2013.

Phillips got her own show on Food Network, ‘Southern at Heart’. Later, the show premiered on October 27, 2013. Currently, she is hosting the ‘Bobby and Damaris Show’ on Food Network with her former Food Network Star co-judge Bobby Flay. Furthermore, in October 2017 she began co-hosting ‘Southern and Hungry’ on Cooking Channel.

Food Network star Phillips has not revealed her current salary. However, she has an estimated net worth of around $ 4 million.

Phillips has kept her life and career away from the mainstream media spotlight. Hence, there are no rumors or controversies concerning her at present.

Talking about her body measurement, Phillips has a height of 5 Feet 8 Inches. She has a body measurement of 35-23-35 inches. Furthermore, her hair color is dark brown and her eye color is hazel.

Know about Justin Shearer a.k.a Big Chief and his love for racing cars! Besides love for his cars, know about his real love, his wife and his kids!